Ding Dong, Twinkie is dead thanks to Obamas, US economy and unions 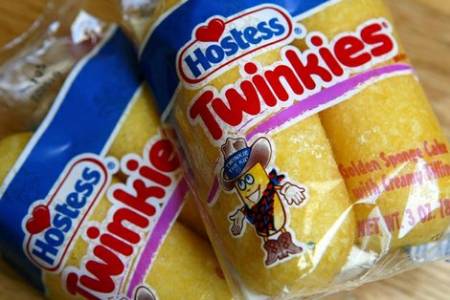 What is the world coming to? Just ten days after Barack Obama was re-elected, Europe is now in the midst of another recession, our stock market has tanked and unemployment claims have skyrocketed.

With the sad reality that Obamacare will not be overturned, restaurant chains are taking action to stay in business. Applebee’s and Papa John’s announced job cuts to deal with the increased costs of Obamacare, while a major Denny’s franchise owner revealed not only layoffs, but a surcharge will be added to bills to cover the government’s new mandated healthcare expense.

To add insult to injury, today, we learned that an iconic American snack will be no longer available. The beloved Twinkie, as well as other Hostess products such as Ding Dong’s and Wonder Bread, will soon cease to exist.  It is another example of how this horrible economy is leading to fewer options for consumers.

Hostess is shutting its doors after a breakdown in negotiations with the labor union representing a large number of their 18,500 striking employees. Sadly, union workers chose to ignore the company’s deadline to return to work, obviously deciding that unemployment benefits are preferable receiving a payroll check. According to Hostess CEO Gregory Rayburn, “We deeply regret the necessity of today’s decision, but we do not have the financial resources to weather an extended nationwide strike.”

These 18,500 employees are just the latest in the long line of Americans who are unemployed in the Obama economy that voters just approved in the last election. With historic numbers of Americans on food stamps and a staggering 23 million people out of work, the national economic news is very bleak. This disturbing announcement from Hostess underscores the depth of the economic troubles across the country.

The corporate closure will eliminate not only jobs, but 33 bakeries, 565 distribution centers, 5,500 delivery routes and 570 bakery outlet stores in the United States. While some workers bucked threats from union bosses and returned to work, it was not enough. "The problem is we don't have enough crossing those lines to maintain normal production,” said Rayburn.

So, this ends a company that has been in business since 1930 providing delicious treats to generations of customers. While it is a sad day for most Americans, one person who will be celebrating is First Lady Michelle Obama, who is the self-appointed healthy eating czar in our country. She famously told her husband that he could not eat a fried Twinkie at the Iowa State Fair. Not long ago, Mrs. Obama bashed Gabby Douglas, Olympic gymnast and Gold Medalist, for craving the taste of an Egg McMuffin after the games.

Will this nonsense end with Americans only being able to eat food approved by Mrs. Obama? In just the past few months, New York Mayor Michael Bloomberg killed the Big Gulp and now the labor unions and the Obama economy have killed Twinkie.

In this environment, no fast food business or snack maker should feel safe in America today. Watch out McDonald’s, Michelle Obama, the labor unions and the food police could be knocking on your door next with an eviction notice.