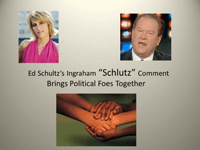 Leftist blowhard Ed Schultz was suspended from MSNBC yesterday for vile comments he made about conservative talk show host Laura Ingraham. On his lunatic fringe radio program Schultz called Ingraham a “right wing slut…a talk slut.” He was ranting about Ingraham’s criticism of Obama’s trip to Europe and instead of focusing on the content of her remarks; he veered into a personal attack, par for the course for liberals.

His contemptible attack on Ingraham was so offensive that even the liberal management of MSNBC had to take action. Unfortunately, Schultz was only suspended for a week, instead of fired for his remarks. This incident is another reason why the network must be perpetually embarrassed by the pathetic quality of their on-air hosts.

Schultz is a hothead who frequently gets into trouble. When he was not included in election night promos, he yelled that he would “torch this (bleeping) place.” In discussing New Jersey Governor Chris Christie, Schultz called him a “cold-hearted fat slob.” Well, Ed, I guess it takes one to know one.

Notwithstanding his embarrassing history of hate, Schultz’s sexist attack against Ingraham marked a disgusting new chapter in his ongoing campaign of harassment against conservatives. Even Schultz realized his error and announced that the comments were “the lowest of low for me.”

As a popular broadcaster, Ingraham is accustomed to being attacked by liberals, who are supposed to support equality between the sexes, but routinely trash and abuse successful conservative women.  While liberals preach solidarity with feminism, their actions toward conservative women betray a much different attitude.

Liberals like Ed Schultz treat conservative women with contempt and insults, the antithesis of fair treatment.  This mistreatment from liberals routinely goes beyond insulting conservative women and ventures into the realm of sexual harassment.

Who can forget the behavior of liberal icon Al Gore, every masseuse’s worst nightmare? Several masseuses reported that Gore propositioned them, in fact one pressed charges against Gore, calling him a “sex crazed poodle.” He squeezed her nipples and threw himself on top of her. She was able to escape his crude advances only after yelling “Get off me, you big lummox!”

Gore’s deranged behavior may have been his sick way of emulating his liberal Democratic counterparts, such as former presidential candidate John Edwards. Yesterday, ABC News reported that John Edwards may be indicted for illegally using campaign contributions to hide an affair with a campaign worker. His philandering occurred while he was married to his wife who was dying of breast cancer. Edwards must have learned how to treat women from that serial abuser, Bill Clinton or from longtime Democratic Party icons like Jesse Jackson or Ted Kennedy.

Clearly, as a sexist pig, Schultz has plenty of company on the left. Congratulations to the leftwing management of MSNBC, who at least took some action. The network rightly realized that Schultz had gone too far and that “remarks of this nature are unacceptable and will not be tolerated.”

The cable news world will be cleaner for only a short period, for Schultz will return to pollute the airwaves in just one week. In the end, the reaction was too mild. Instead of being fired, he was given a slap on the wrist. This is just more trouble for MSNBC, which has tried to offer itself as the liberal counterpart to Fox News. The problem is that their hosts keep getting suspended or fired. In the past year, hosts such as David Schuster, Keith Olbermann, and Joe Scarborough have all been reprimanded or suspended for either improper behavior or on-air antics.

Schultz diatribe against one of the most successful talk show hosts in the country only shows how poorly equipped he is to debate the issues of our day. Whenever a talk show host has to resort to vile insults, he has lost the argument.

The group noted that calling Ingraham a “slut” was a “sexist and misogynist attack based on her gender and not her political views or comments.” The Women’s Media Center noted that the remarks were “harmful to women in media, politics, and beyond.”

In one way, Schultz has accomplished quite a bit with this vile diatribe. In fact, he has performed quite a hat trick and for once united conservatives and liberals in condemning him. When outraged conservatives agree with a liberal group founded by Gloria Steinman and Jane Fonda, a rare political event has occurred. Congratulations Ed Schultz for bringing the political world together for once.