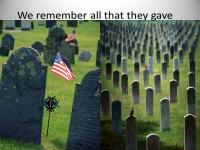 At the time of this writing it is Memorial Day…a time when we step back and take into account the many sacrifices of those who have given of themselves so that we might enjoy the freedoms and advantages we do today.

This not only applies to those men and women who gave their lives, but to all who served.  Many were wounded, others returned with the horrible memories that they must surpass for the remainder of their lives.

I remember one 84 year old veteran, a dear friend, who never talked about his experiences during World War II.  Then one day I showed him a picture of the Carrier Theodore Roosevelt being deployed to Iraq.  He stared at the picture, then for the first time mentioned his own experiences on the Carrier Intrepid in the Pacific.  He described the carnage of the Kamikaze attacks and the extensive damage sustained by his ship.

Then tears fell from his eyes landing on the newspaper when he described how the survivors walked the decks picking up body parts placing them in pillow cases and bringing them to the fantail of the carrier where a chute had been constructed.  Each sailor placed his “bag” at the edge of the chute then a priest blessed it and another sailor with a fire hose washed the remains into the eternal deep.

That was over sixty years ago and those vivid horrific memories had never left him.  He had surpassed them and lived a normal life with a wonderful family and friends who all loved him, but none knew what lay buried so shallow in his mind.

All those who have served this nation deserve our respect and admiration.  No matter what capacity, they offered their precious time and lives to our service.  Why is it then that Memorial Day is not the most celebrated holiday in America?  How can it be that so many don’t even know it meaning while they grill their hotdogs and play baseball?

It is time for Americans to take a moment to consider what this day is truly all about. Were it not for the actions of those who gave so much, all that we are would not be.