Retailers turkeys are the Grinches who stole Thanksgiving 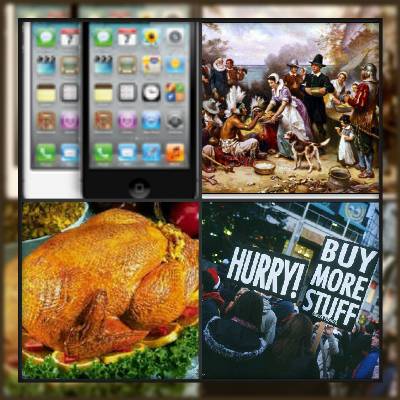 What happened to the wonderful family holiday of Thanksgiving and sharing turkey with friends and family?

Today, it is under assault from crazed retailers who are trying to kill this cherished celebration.

While this special day was once given top billing under Christmas as a major U.S. holiday, Thanksgiving is now no more than a speed bump between Halloween and Christmas.

It is viewed by retailers as an unnecessary obstruction preventing their overpriced retail goods from reaching overeager shoppers.

This year, it is reaching an extreme level as many retailers such as Old Navy, Sears, K-Mart, Target and Wal-Mart are actually opening their doors on Thanksgiving Day for the first time. So, Black Friday is not enough, in their quest for an extra buck, retailers are forgetting about their employees who will not be able to spend this holiday with their families.

Hopefully, Americans will boycott these efforts by retailers to intrude on a day of family, food and prayer. If the experiment to open on Thanksgiving fails, retailers will have to drop it, or risk losing money.

Some Americans are already posting on Facebook and other media sites protesting this unnecessary and unwise advancement of commercialism. Wal-Mart workers are fighting back by staging protests and threatening a strike.

Maybe this will help, but corporate giants are only responding to the demands of the public for more “stuff.” In reality, most of these items are not truly needed, but desired as part of our societal trend to accumulate more and more material items.

In contrast, Thanksgiving is about giving thanks to God for our blessings. It is a time for reflection and prayer, a time to celebrate our family and our country. It is not a time for more shopping and crazed consumerism.

In recent years, we have witnessed horrific incidents of Christmas shoppers stampeding fellow shoppers or using pepper spray to gain an advantage in line. In one recent case, shoppers bypassed a dead body to continue their pursuit of more gift buying.

Is a new tablet really more important than human life? What has happened to our humanity and our values? As Americans, we have lost sight of what is truly important. While part of the blame may rest with these stores that are encouraging this type of behavior, most of the blame rests with the American people who are engaging in unfortunate activity that contradicts the true meaning of Thanksgiving.

According to the Consumer Electronics Association holiday survey, “more consumers want a tablet for the holidays than want even money or world peace.” This result is a sad indictment of our deteriorating culture and our country as a whole.

It might be time Americans reflected on President George Washington’s 1789 proclamation establishing a day of “public thanksgiving and prayer.” He said it should be a day set aside to “the service of that great and glorious Being who is the beneficent Author of all the good that was, that is, or that will be.”

It is hard for Americans to fulfill Washington’s request when we are at Target fighting with other customers on Thanksgiving Day to get the latest video game or gadget. It is time to end the madness and restore Thanksgiving to its rightful place as an American holiday.

More in this category: « US Polls: Hamas vs. Israel, Climate Change and Sandy-like storms Can GOP win another presidential election after Romney's loss to Obama »
back to top