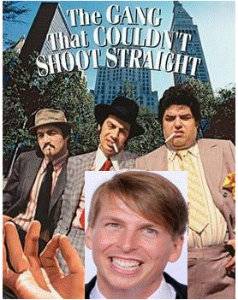 “There are tremendous ramifications for our members and the system.”

–Cindy Rougeou, executive director of the Louisiana State Employees Retirement System (LASERS), in discussing the need to obtain a determination from the IRS on whether or not Piyush Jindal’s recently approved “cash-balance” 401(k) type retirement plan for new hires, scheduled to go into effect on July 1, 2013, will be eligible for tax-exempt status–a question one would reasonably expect Jindal to have determined well in advance of presenting his new plan for legislative approval.

Jimmy Breslin would love this group—Piyush Jindal and his minions—that calls itself an administration and which apparently believes it is doing a magnificent job of running the State of Louisiana.

Stand by. We’ll get to that in a minute.

The only difference between this administration and the Three Stooges is that the administration contains far more than three lovable slapstick clowns. And they aren’t lovable. It would appear, instead, that these people are multiplying like rabbits. We can only hope that is a dream and we will soon wake up.

Breslin is a Pulitzer Prize-winning columnist for the New York Daily News who once wrote a best-selling book called The Gang That Couldn’t Shoot Straight which was made into a movie that typically didn’t do the book justice.

His fame is as a “street columnist,” meaning he gets his political column ideas from New York’s seedier bars, cops on the beat, garbage collectors—anyone but the politicians themselves.

He has written some memorable lines in his career of 40-plus years—like the one about a subject’s receiving “immediate lacerations of the credibility,” or “…designed by architects with honorable intentions but hands of palsy,” or, our personal favorite: “Media, the plural of mediocrity.”

But we digress. Let’s get back to why Breslin would love Piyush Jindal, Timmy Teepel, Kyle Plotkin, et al.

The shocking speed (or should we say Shock Doctrine speed) at which the legislature approved Jindal’s education reforms is still seared into our collective memories. Well, okay, some of our collective memories. There are those so caught up in Dancing with the Stars and TMZ that they are not even aware there is a legislature, let along education reforms.

One of the “reforms” in that education package was the approval of vouchers. But guess what? The vouchers were approved without the administration’s or the Department of Education’s having bothered to establish accountability guidelines. Thus, we have 315 vouchers going to a Ruston school that for all intents and purposes, doesn’t even have books, desks, or buildings to accommodate 315 students. Then there’s that school in DeRidder whose administrator is on court-ordered probation to exercise no financial authority over anything. Yet it received approval for vouchers worth hundreds of thousands of dollars—and school officials couldn’t even correctly spell “Scholarship” on its portable sign set up outside the school.

In pitching his education reform, Jindal made a big deal of saying he wanted to rid the state of failing teachers. Yet, his new law allows uncertified teachers to teach in charter schools while traditional public school teachers still must have certification.

When a teacher in a public school is found to be a pedophile, in violation of drug laws or of prohibitions against sex with underage students, the one weapon heretofore available to school administrators was the ability to yank the teacher’s certification so that he could never again teach in Louisiana. That safeguard does not exist in charter schools.

Before the school reform debacle, there was the Office of Risk Management which the state paid F.A. Richard and Associates (FARA) $68 million to take over and then added another $6.8 million sweetener less than eight months down the road. Within weeks of the approval of the $6.8 million contract amendment, FARA sold out to an Ohio firm, which less than four months later, sold out to a New York firm—all despite a clause in FARA’s original contract which specifically said its contract could not be transferred without “prior written approval.” When asked by LouisianaVoice for a copy of the prior written approval, the word from the Division of Administration was that no such document existed.

Now about that retirement SNAFU.

Jindal failed to gain approval of all but two of his state employee retirement bills. One that did pass was the changeover to a 401(k)-type pension plan for new hires but the administration again managed to get the proverbial cart ahead of the horse by not tying up a few important loose ends—like, oh say, will the approved plan be a “qualified plan” under IRS regulations and thus be tax-exempt?

If not, vested contributions by employees would be subject to taxation, according to Cindy Rougeou, executive director of the Louisiana State Employees Retirement System (LASERS).

Jindal took time out of his busy nationwide speaking schedule and jockeying to become Mitt Romney’s running mate (which has about as much chance as Rosie O’Donnell’s being chosen Miss America–but Lord, wouldn’t it be fun to watch Jindal and Joe Biden in a vice-presidential debate?) to try to get a clarification—again, well after the fact.

Piyush on Friday authorized Commissioner of Administration Paul Rainwater to apply to the IRS for a determination letter on the eligibility of the “cash-balance” plan, scheduled to go into effect on July 1, 2013.

The issue of whether or not the new plan would be considered the equivalent to Social Security also created a new legal wrinkle that must be considered.

A tax attorney also told the LASERS board on Friday that should the cash-balance plan not be considered equivalent to Social Security, then new employees would be required to be enrolled in Social Security in addition to the 401(k) plan. That would mean the state would have to match employee Social Security contributions, thus adding significant costs to the state whose employees are not now members of Social Security.

“It is the responsibility of the employer—the state of Louisiana—to provide the equivalent benefit,” Rougeou said. “They (the state) are the ones (who are) going to be on the hook for paying for Social Security,” she said.

Only one other state, Nebraska, has a cash balance system, Rougeou said, but she pointed out Nebraska state employees also have Social Security.

The real absurdity in all this is that the LASERS board was first at the starting gate in deciding to seek the IRS ruling Friday morning but Jindal, as is his wont, jumped in front of the parade later that same day and shouted, “Follow me!” in an effort to make it all seem as if it were his idea.

In his executive order, Piyush said that as pension plan sponsor, the state would be the “appropriate party” to fill applications with the IRS. LASERS is not the only state retirement plan for which a determination must be made, he sniffed; there are three other systems that must also be considered. He said in his order that it would be better to coordinate applications “in a manner that avoids multiple, duplicative and conflicting submissions.”

Jindal can’t say he wasn’t given a heads up on this issue. LouisianaVoice, well before the spate of retirement bills ever came up for debate, posed the Social Security question. If we, with our admittedly (like Jane Smith) limited knowledge of such matters, could see the problem, then where were the political geniuses?

Of course, we know that Jindal probably wasn’t even in the state. He was too busy campaigning for others, raising campaign funds for himself and hawking his book to attend to such mundane fiscal matters.

Still, the question lingers: why wasn’t Jindal, with all those whiz kids around him to give him the benefit of all their wonderful knowledge, made aware of the potential IRS and Social Security problems—before the retirement bills were written, introduced, and voted into law?

It’s a question that should not be allowed to go away.

All together now: Oops.

Tom Aswell is an author and the publisher of LouisianaVoice.com.

More in this category: « NFL's Goodell will show Bounty evidence cards in court Advocating for Jindal’s vetoes complying with Louisiana’s constitution »
back to top