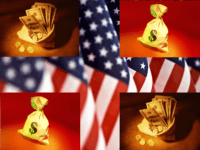 Contributors will be able to give unlimited amounts of money to help elect the individual candidates they support, thanks to a new national “SuperPAC”, co-founded by the Chairman of the Louisiana Republican Party Roger Villere.

While the expenditures of this new SuperPAC will be independent of the candidate’s campaign, this new funding vehicle, in a practical sense, will allow almost unlimited contributions to any candidate, Federal, State, or Local.

In an interview with The Louisiana Weekly, Villere explained, “We had to do something to combat this unbelievable amount of money” that had armed Democrats against Republicans in the last Presidential cycle.    “Obama had ten times the money of McCain.  We couldn't compete.”

The ability of Labor Unions and other independent advocacy groups to raise money for the President’s campaign had put the GOP at a financial disadvantage in 2008.  It was one that looked to continue in 2012, as the President sought a campaign budget of over a billion dollars.

Villere and his co-founders Solomon Yue and James Bopp, Jr. saw the potential in the landmark 2010 Citizens United Supreme Court ruling that others had missed.  “What we have done is combine an number of laws,” Villere explained.  “We have packaged these court settlements, these changes, into one group, a super PAC”

In particular, “James Bopp”, Villere outlined, “who is an attorney with a long history of activism in the Republican Party and has worked with a lot election law” including the Citizens United case saw the ability to create something new.

Unlike other PACs set up to take advantage of the ruling, Villere’s group will let donors earmark their checks for certain particular candidates. In Bopp’s plan, the Republican Party and its candidates would ask donors to give them the maximum amount allowed under current law, then tell donors to give any additional money to the SuperPAC, where it will be directed towards that candidate's campaign.

“A donor can donate the money to a SuperPAC and earmark to a particular race.” Even if they have already maxed out their federally allowed contributions to the candidates. That is a landmark change, not seen since the Watergate reforms of the 1970s.   It is “not legal to do that when you donate to a party,”  Villere noted, a problem that Democratic Lt. Gubernatorial candidate Caroline Fayard encountered when her father contributed hundreds of thousands of dollars to the State Democratic Party, money that found its way into party-paid advertising for his daughter’s campaign.

That was considered an illegal campaign donation, since Calvin Fayard's donation was to a political party.    In contrast, under the rules of the SuperPAC, a contributor could put whatever sums he or she liked towards a particular candidate.

The only restriction, Villere observed was, “We will not be able to sit down with the candidate and coordinate expenditures.”

The operation will have a national, as well as local nature.   The GOP SPAC will operate as a clearance warehouse for independent expenditures as a federal Independent Expenditure PAC, as well as through tailor-made state IEPACs based on each state's requirements, to serve the following Republican candidates and committees, including, Local and regional candidates, e.g. Mayor, State House & Senate, etc., Statewide candidates, e.g. Governor, Secretary of State, etc., Congressional, Senate and Presidential candidates, and State and National political parties.

This independence to accept and spend unlimited amounts, Villere defended as an improvement on the current system, since the SuperPAC must be “totally transparent”.

“Unlike some of these private pacs, you don’t know who is giving.”  In the SuperPAC’s case, unlike them “everything we take in, will have to be reported.”

“Transparency is what makes this open."   As a candidate, “you have to get your message out.   That costs money.”  All "we are saying is", Villere maintained,  “have open transparency, raise the money the way you want, and report it.”

Paul Ryan, an election lawyer who should not be confused with the Budget Committee Chair, argues that there should be a $5000 limit to SuperPACs.   Villere disagreed,  ”My personal opinion is that money is going to find its way into a campaign.”

“Any individual, a superwealthy individual, can do an independent expenditure on a campaign for or against anyone they want.”   That leaves non-wealthy candidates at an inherent disadvantage.  They are limited by Watergate era contribution ceilings.

“This PAC gives you a level playing field,” Villere stated.  “All upfront, all reported, all transparent,” every dollar given reported to the Federal Election Commission.

RSPAC would open both federal and state accounts for such earmarked funds, design independent expenditures for such candidates, solicit bids from vendors, place orders with vendors for independent expenditures, keep books to account for all contributions and expenditures, meet all federal and state legal and reporting requirements and, after the election, open their books to donors and soliciting political parties and candidates, so that the spending decisions by RSPAC are subject to total transparency, according to the Chairman.

The RSPAC would coordinate spending with other independent spenders to bridge gaps in the independent campaigns supporting Republican candidates, but he added, “RSPAC's personal would be firewalled off from appropriate political parties and candidates, and their agents, to prevent coordination and other legal concerns.”

“This has been ruled on by the Fourth district and Ninth district courts,” Villere told the Weekly.  “It is hard money”, and can be directed to any candidate, in virtually any legal fashion.

If imitation remains the sincerest form of flattery, the very same Democrats who argue the Republicans SuperPAC is illegal, likewise seek to copy it.  Two Democratic 'Super PACs' are asking the Federal Election Commission to clarify the rules regarding these new vehicles, to ensure the party can fairly compete with the big money outside groups first developed by Villere, Yue, & Boop.

"We're pretty sure that is not legal," Lapp told the Capital Hill Newspaper POLITICO about the proposal to allow members of Congress and other officeholders to get involved in PAC fundraising -- but if the committee rules it legal, she said Democratic groups will also follow suit to ensure a fair playing field.

Christopher Tidmore is on the radio weekdays from 7-8 AM on WSLA 1560 AM, online at www.gtmorning.com