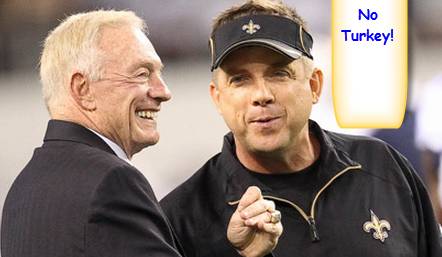 People who assume I have inside knowledge about the New Orleans Saints ask me all the time why the team can't get a contract done with their head coach.

Of course, I must feed the perception, so I thoughtfully rub my chin, look quizzically at the moon, tug on my ears one at a time and admit straightaway "I DUNNO!" And I don't. I do know that the more Sean Payton goes without signing a new contract, the longer the Jerry Jones rumors will continue to fester needlessly.

What I also possess, after several decades in professional and college sports, is an adequate insight into the thought processes of coaches. That experience, at least up until now, has shown that a coach will bolt one team and throw himself into the arms of another for one of three reasons. First, he wants more money; second, he wants a chance to win; and third, he wants the final say on personnel decisions. And not one of those reasons apply to Sean Payton. And here is why I believe that:

Reason No. 1: The coach wants more money. That loud noise you hear is the  "Wrong Answer" buzzer blasting since the Saints' current offer to Payton would make him the highest paid NFL head coach. The annual figure is said to be $8 million, which, according to Forbes Magazine, is more than Bill Belichick's $7.5 million and the $7 million that goes to Pete Carroll, Jeff Fisher and Mike Shanahan. Even Payton's 2012 contract was at $7 million, so he was already in tall cotton, so it can't be the money.

Reason No. 2: The coach wants a chance to win. This reason is equally bogus, because Payton has won one Super Bowl with this team, and where else in the NFL does he have a better chance to win another? Drew Brees is one of the top three quarterbacks in the NFL and probably will be for the foreseeable future. I hardly believe that Tony Romo is held in quite as high esteem by Payton, since the closest Romo ever got to the Super Bowl was when the 2011 game was played on his home field. In a city that embraces its heroes, Payton is King of Mardi Gras. It's not this one.

Reason No. 3: The coach wants the final say on personnel moves and/or disagrees with management on major decisions. Payton has the final say on personnel now and works closely with GM Mickey Loomis to strengthen the team even more. If you don't believe Payton is in an ideal situation, they why would he want a clause in a new contract that says if Loomis leaves, then Payton's contract is invalid and he can leave, too? For that matter, he has the ideal owner in Tom Benson, who has never refused anything of the two men who presented him with the one thing in the world he could not buy: His own Super Bowl trophy.

Aside from the conventional reasons is the one that Payton wants to be closer to his children who live in Dallas with his former wife. Forgive me for sounding unsentimental, but $8 million can buy a lot of chartered flights between New Orleans and Dallas. The parties need to sit down and get the contract done. Until they do, they are needlessly creating yet another distraction for a team that has had enough of them.

TELL US BELOW WHAT YOU THINK...DO YOU BELIEVE THE SAINTS WILL LOSE SEAN PAYTON?

More in this category: « After burying Romney, Jindal has moved on, so Louisiana, get over it Now ceasefire, so will Hamas, Morsi, Israel and Obama move towards peace? »
back to top