Due To National Enquirer, Indicted John Edwards Now Running Away From Jail 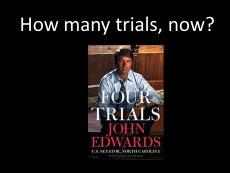 In 2004, lying philanderer John Edwards was almost elected Vice President of the United States. In 2008, he ran for President while simultaneously hiding an affair with a campaign worker.  He was conducting this sordid relationship while his wife was dying of cancer. After her illness was disclosed, he decided to continue with his campaign and the affair. When confronted with evidence of a love child, Edwards continued his lying ways. His actions were not only despicable, but most probably illegal for Edwards is accused of funneling $925,000 in payments to care for his mistress and their baby. Today, a federal grand jury in Raleigh North Carolina issued a six count indictment against Edwards, including four counts of illegal campaign contributions, conspiracy and one count of false statements.

It is quite a fall from power for a smooth talking attorney who was elected to the United States Senate and was on the threshold of the Vice Presidency. Edwards was caught not only in repeated lies about his affair and the resulting child, but in using campaign cash to cover up his messy personal life. He created an elaborate scheme to hide his mistress and her child and asked campaign aides to lie for him in the process. One top aide, Andrew Young, even lied about fathering the child in an attempt to cover up for Edwards.

Edwards might have been able to get away with this deception if not for the investigative work of the National Enquirer. This tabloid pursued the story with vigor while the liberal mainstream news media looked the other way.

The liberal media did not want to expose a fellow liberal so the allegations of the affair and child were not covered. In contrast, the National Enquirer exposed a secret hotel meeting between Edwards and his mistress and child.

Once the tabloid published the story and pictures, Edwards admitted to the affair, but not the child. Only later did Edwards admit to fathering a child out of wedlock. At this point, his wife Elizabeth Edwards decided to divorce her lying husband and died with the pain of his misdeeds providing an unfortunate burden in her time of suffering.

John Edwards tried to worm his way into the White House, hoping that the American people would not realize the details of his despicable, morally bankrupt behavior. In his unsavory quest for power, Edwards betrayed his wife and his family and destroyed whatever shreds of honor and dignity he possessed.

Fortunately, the American people now know the real story of John Edwards and will not have to worry about seeing his name on another political ballot. Edwards is no longer trying to get elected, he is just trying to stay out of prison.