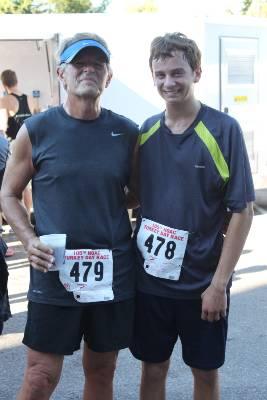 It started out as a father's way of getting his 16-year-old son motivated, but it ended on Thanksgiving Day with so much more.

As background, I have been a serious runner for more than 40 years. With a few interruptions caused by muscle tweaks and groans, a daily run has been an essential part of my life. I believe good physical health contributes to good mental health and attitude.
So you can see why I was delighted that my son Charles Connor started running cross-country in fifth grade. He started out much like I did, not particularly liking the idea of leaving a warm bed or TV screen to go outside in all weather and slog around until exhaustion took over. But C.C. stuck with it, and this year as a member of the Jesuit High School JV team, he regularly finished two- and three-mile races in a commendable 7-minute mile time.
Which brings us to the annual Thanksgiving Day five-mile race in New Orleans. My wife Jean and I usually run it, and it has become our traditional start to the holiday season. With my son running well this year, I challenged him to run the Turkey Day Race with us, and I bet him $50 against a few car washes that I would beat him. Now, I haven't run a 7-minute mile in quite a few years, but I thought it would motivate him to keep running after the high school season finished in October. You know, good physical health contributes to positive attitude, etc., plus we would have some fun with it.
The challenge became more serious when I began to lose some extra pounds this year and began to run as well as I had in many years. I was not yet running 7-minute miles, but then I did not believe he could keep up such a pace for five miles, which is at least two miles longer than his high school races. The day dawned bright (as the poets say), and Jean drove us to the starting line, pledging this year merely to photograph the race and record the victory for one of us. She was pulling for her son, but if truth be told, so was I. But I told him as we drove to the race, "Son, I hope you win, but I'm going to try and beat you!"

We started off fairly even, running together until he eased ahead late in the first mile. I kept a steady pace as C.C. lengthened his lead by as much as 50 yards. The fluorescent stripes on his gray shirt were easy to follow, especially as he began to drift back closer to me in the third mile. It appeared my strategy was working to perfection as I closed the distance. At about the four-mile mark, he slowed even more, and I ran alongside him and said: "Son, you need some motivation!" He looked at me, his eyes grew large, and he said "Oh, shoot!" as he opened a small lead.
However, my pace was steady and I passed him, thinking he had faded to oblivion. I had about a half-mile to go and was feeling pretty good, my pace steady as I made the turn into Tad Gormley Stadium and the finish. As I ran through the chute under the stands and onto the turf track I was feeling chipper until I heard a voice behind me say "See ya later, Pops!" C.C. had a kick left, and he smoked me in the stretch. I could only smile wide, laugh a bit and finish seven seconds behind him. I believe I was happier than he since the most important part of my plan had worked to perfection.
________________________________________
Jim Miller's new book, "Where the Water Kept Rising," is now available in local bookstores, at Amazon.com and at his website: www.JWMillerSports.com

More in this category: « Now ceasefire, so will Hamas, Morsi, Israel and Obama move towards peace? New Orleans Thanksgiving at the Fairgrounds is an easy bet »
back to top