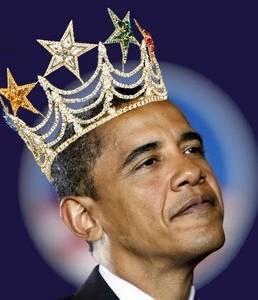 On November 6, President Barack Obama won re-election by a relatively slim margin in the popular vote.  He was re-elected despite his stewardship of a horrible economy and with the help of a clueless opponent who played political prevent defense during the last few weeks of the campaign.

Obama received no mandate from the voters. He remains a controversial President with a very lackluster record of achievement.

Nonetheless, many of the President’s most ardent supporters are so delusional that they are ready to ascribe supernatural powers to him.

For example, entertainer Jamie Foxx used his role at the Soul Train Awards to praise President Obama as “our Lord and Savior.” He implored the crowd to show their support for the President by standing up for him.

Foxx’s comments were included in a 30 second spot by BET to promote the awards broadcast and draw viewers to the program.  Obviously, BET found Foxx’s comments to be both provocative and worthy of publicity.

This is no surprise for viewers are regularly subjected to awards shows that delve into politics. Entertainers regularly use these shows to display stunning ignorance on political topics. They usually try to promote a tired, liberal, politically correct agenda, but it is not the right time or place. In essence, there is no good reason for any entertainer to inject politics into an awards show. It is even more pathetic for an actor like Jamie Foxx to implore a crowd to “stand up” for a politician such as Obama. However, it is an entirely different level of craziness and even blasphemy for Foxx to designate Obama as “Lord and Savior.’

Memo to Jamie Foxx, there is only one God and it is not Barack Obama.

He may have been making a horrible joke or pandering to the crowd of African Americans by such mindless Obama praise but either way it was entirely inappropriate.

Problems that beset the inner city neighborhoods of our nation have been ignored by President Obama.  He has no real plan to combat violent crime, rampant drug use, blight, poor public schools, poverty and staggering urban unemployment.

The President, who Reverend C.L. Bryant former leader of the NAACP in Garland, Texas, noted had to “move to the south side of Chicago to learn how to be Black,” is seen by a hero in a community that he takes for granted.

In the last election, the President received 93% of the Black vote, slightly lower than his total in 2008, but still amazingly high. It is support largely given to the President based on his skin color, not his performance in office.

Over the next term, more African Americans will likely become disillusioned with President Obama. Inevitably, his liberal policies will fail, as they have throughout the world. When that happens, his approval rating will fall among African Americans, for he is not a “Lord and Savior,” he is more like a bad joke and maybe even Jamie Foxx will finally understand it.

DO YOU BELIEVE PRESIDENT OBAMA IS A "LORD AND SAVIOR" FOR THE AFRICAN AMERICAN COMMUNITY?"--TELL US BELOW