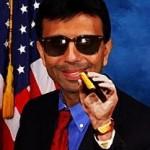 It might be understandable if critics of Piyush Jindal were somewhat smug after revelations that he lobbied—practically begged—to be chosen for vice president or at least be awarded a cabinet position in the Mitt Romney administration during the Republican nominee’s unsuccessful campaign for president.

Bobby Piyush Jindal, after all, kept feeding us that asinine line that he had the job he wanted and that he wasn’t interested in higher office. He even went so far as to say he would not accept a cabinet position which seemed odd, given that he had not been offered one.

The Daily Mail, a British publication which somehow seems to provide better coverage of Washington than our own media, has a story that quotes a Romney insider as saying Romney’s biggest post-election critic, one Piyush Jindal, “wanted very, very much to be Vice President.”

Of course, we in Louisiana who know him best knew that all along; he couldn’t wait to take the first flight out of Baton Rouge headed for the Beltway. We knew it, he knew it, the media knew it but still he tried to play coy with us, a tactic he is not very good at—in fact, is downright clumsy. Diplomacy is not his forte; never has been, never will be.

What he is good at, however, is taking Louisiana citizens—those who twice entrusted the state’s highest office to him—for idiots who were too stupid to see through that façade of sincerity, that veneer of humility, that false mask of concern for the people of this state.

None of it is—or ever was—real. We’ve been beating that drum for more than two years now and the message finally seems to be getting through. This guy is not to be trusted—not with our lives, our health care, our education (public and higher), our prisons, our taxes, our economy, and certainly not with all those political appointments to his campaign contributors.

• We sat idly by as he systematically undermined the state’s infrastructure by giving away billions of dollars in tax breaks, incentives, and credits to corporate entities.

• We have watched him rape public education in the name of reform, all the while, bringing in unqualified administrators at six-figure salaries, some of whom are allowed to work from their homes in other states.

• We have seen him abandon higher education to survive by its own devices (read: tuition increases which hurt those least able to absorb the financial pain).

• We have witnessed him as he turned his back on hundreds of thousands of Louisiana citizens in need of health care by implementing ruthless budget cuts to and in some cases, closing state hospitals and clinics.

• We have stood on the sidelines as he closed prisons after being thwarted in attempts to privatize those facilities.

• We have watched as he privatized state agencies, one of which amassed a $500 million fund balance while efficiently managing state employee health insurance claims.

• We have observed over and over how he has shamelessly courted the national media while ignoring requests from Louisiana media for interviews and comments.

All these actions (he refers to them as “reforms” when he appears on those frequent network news interviews) have cost thousands of Louisiana citizens jobs which in turn have cost them their benefits. He even boasts on those interviews of the jobs he has eliminated, failing to mention the has-been legislators he has appointed to six-figure state administrative jobs—jobs for which they are completely unqualified in every respect.

And, of course, when anyone disagrees with him, be it a state employee, an administrative official, a college president, an attorney, a doctor or even a legislator, he or she is immediately fired or demoted, a practice that has come to be known in Louisiana as teagued.

He has run up more than $100,000 in costs for state police security alone while flitting from state to state, from network news show to network news show, raising campaign money, promoting his book on leadership (what irony!), campaigning for other Republicans, and more recently, lecturing the national Republican Party on becoming more lovable, more touchy-feely.

But sometimes when one bites the hand that feeds him, it can bite back.

Former Romney aides have outed those “craven hypocrites” whom they say only days before the Nov. 6 election were in a virtual feeding frenzy over desired cabinet positions in the Romney administration that, it turned out, was never to be.

“I’m sure Gov. Romney is finding out now who his real friends are,” one aide was quoted as saying. “There were one or two well-known figures who were late committing to support him, who were the most eager to curry favor when it looked like we would win and who are now out there trashing the governor,” the aide added.

That would be our boy Piyush and Newt Gingrich.

Gingrich was late in joining the party because he was seeking the nomination in his own right. Piyush, you may recall, was lightning quick with his endorsement of Texas Gov. Rick Perry before that ill-fated campaign cratered.

When the train wrecks formerly known as the Gingrich and Perry campaigns tanked, Gingrich and Piyush saw the Romney parade headed down the street and jumped in front, yelling, “Follow me!”

Romney former foreign policy adviser Dan Senor told MSNBC, “In politics, when you win, you are a genius and when you lose everyone calls you an idiot. But to see the way certain craven hypocrites are acting right now really sticks in the craw.”

Senor, by the way, is the son-in-law of former Louisiana Secretary of State and Insurance Commissioner Jim Brown.

Senor said “leading figures” were cozying up to Romney in Ohio days before the election, trying to land cabinet positions.

Piyush made national headlines with his criticism of the Romney campaign within days of his loss to President Obama. He turned on Romney like a junkyard dog would attack an unsuspecting intruder.

And that may be more than an analogy; Bobby Piyush Jindal, the incoming head of the Republican Governors’ Association, obviously now considers himself as the titular head of the party and the one anointed as its official spokesman.

Who better, after all, to criticize than a sitting governor who won 67 percent of 20 percent of the vote in last year’s gubernatorial election? That’s right, the darling of the Republican Party could coax only 20 percent of the electorate to the polls as 80 percent of the state’s voters yawned themselves into a state of catatonic indifference. Of course, his $9 million in campaign funds bowled over an unknown school teacher from north Louisiana who had only about $25,000. What would one expect?

Still, she got 17 percent of that 20 percent turnout. He called it a mandate. We call it swatting a gnat with a meat cleaver.

Does anyone else see the irony here?

But oddly, it’s not smugness we feel as we watch this little drama being played out in the national, indeed international, media.

Instead, it’s a continued sense of sadness and embarrassment for the state and its people.

Compare: Jindal is no hypocrite for Romney comments

More in this category: « Jamie Foxx makes bad BET with his Lord and Savior. Barack Obama Will Court throw book at Jindal's voucher plan? »
back to top