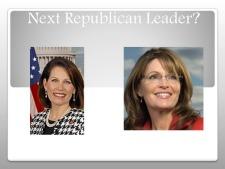 Michelle Bachman is on a roll.

After making a good appearance in the CNN New Hampshire debate early this week, one of the Tea Party’s favorites Bachman made an electrifying appearance in New Orleans on Friday at the Southern Republican Leadership Conference.

According to many of the attendees of the conference, Bachman, who is now running for President, stole the show.

“Rockstar” was the term that a number of attendees uttered in describing Bachman after her conference speech.

Then, that is exactly what many in the crowd was saying about Sarah Palin, another Tea Party favorte as she rocked the standing-room-only audience just last year in New Orleans at the same downtown Hilton Hotel.

Here are video clips of Palin and Bachman in New Orleans, both addressing the respective conferences and both demonstrating that there is a new breed of young, attractive Republican women leaders carving their names on the American political psyche hoping to make a real difference in the nation, if not, the first female President of the United States.