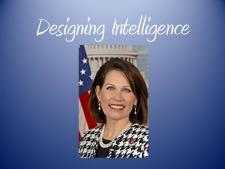 One of the big debates in the Louisiana blogosphere today is questioning Congresswoman Michelle Bachmann’s intelligence or at least her honesty.

Bachmann made a big hit at the Republican Southern Leadership Conference in New Orleans this Friday as she did last week on the CNN Republican Party Presidential debate.

However, at the conference, Kevin Allman of the Gambit tried to ask her a very simple question about a statement she made while on a 2006 panel discussion when she tried to support Intelligent Design or some say “Creationism” in schools.

On the 2006 panel discussion, she said, “there is a controversy among scientists about whether evolution is a fact… hundreds and hundreds of scientists, many of them holding Nobel prizes, believe in intelligent design.”

During a recent interview on Hardball, Andy Kopplin’s high school son, Zach Kopplin challenged Bachmann to name just one of those Nobel Prize winners who believe in Intelligent Design.

On Friday, Allman personally asked Bachman to name one Nobel Prize winner who supports Intelligent Design. The Tea Party favorite must not have heard the question asked to her, not once, but twice.   Instead, she hijacked the questions first by by saying she supports Intelligent Design and then by lodging into dissertations regarding how the feds should block grant money to the states for education and not tell the states what they should teach.

Well, she might have a point about the block grants and decentralizing some of the way we teach our children.

Also, hopefully, if other states want its kids to believe that evolution is a myth and that Intelligent Design should be funded by the government, so be it. That way Louisiana and former biology-major and now Governor Bobby Jindal (who boasts that he knows something about healthcare) won’t look so downright ridiculous with their abominable support of spending tax-payer money teaching a religious belief in public schools which premise which, in effect, defaces science.

Yet, the State of Louisiana is not running for the Presidency of the United States. If it wants to be an embarrassment among states, it has a long history and much precedent to follow. Bachmann is running for our nation’s top job and wants to be the Commander-in-Chief who spends precious time combating fanatic Muslim zealots such as the Al-Qaeda and perhaps even the Muslim Brotherhood who want to indoctrinate the world with its own take of the universe’s origin.

The Congresswoman often complains about the federal government spending too much money and how we must cut back in services. Of course we must deal with the national debt and the budget in a reasonable and sensible way. But, before we give her the keys to the White House and treasury, perhaps Bachmann should name just one of the those Intelligent Design Nobel Prize-winners she claims are so plentiful.

If Bachmann wants to create a Presidential campaign design to show her own intelligence and her own readiness to be the most powerful person in the world, she ought to answer a very direct question related to the very basic tenet of our existence. After all, it would be important to identify those esteemed scientists who might be questioning the very predicate of our atomic power which begins with a little scientific phenomenon called the “atom”, not the “Adam”.