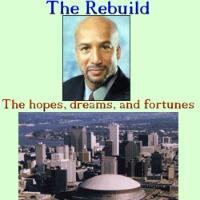 It was the same but a different New Orleans Mayor Ray Nagin.

Yesterday, he was facing the same media with whom he had a rocky relationship during the last four years of his 8-year two-term administration.

This time, Nagin was not trying to sell an idea to move the city forward but was promoting his book, Katrina Secrets.

Nagin spoke for a quarter-hour about the reasons he wrote the book, why he self-published it and what each chapter contained.

Without doubt, I am looking forward to reading his version of the facts involving the first 30 days following the worse natural and man-made disaster in U.S. history. The book is about the first month after a storm which brought the city to its knees and which caused a real debate around the world whether New Orleans be rebuilt.

Unquestionably, the book is being released at the very interesting moment after key players in his administration have faced criminal scandals and there remain questions whether the he has more knowledge about events than he has so far claimed.

For most of the media session it was typical Nagin. He was the man who spoke off the cuff and made statements which would make a press secretary cringe.

There were statements such “we’re not really telling the truth” regarding the current crime wave in the city when he then commented he feared something “really catastrophic could happen” this summer which prompted one reporter to ask “what do you mean, riots?”

When asking if he would return to politics, Nagin said that he doubted it, especially after Katrina but also said that he doesn’t think the city wanted a straight talker like him but would prefer someone smooth who “blows smoke up your butts”.

The former mayor said that he was not that person.

It was a typical Mayor Nagin who once answered my question regarding concerns I had that after his re-election, some supporting Mitch Landrieu said they would be leaving town. To that, Nagin said in front of dozens of cameras he would send them a postcard.

It was the same mayor who on 60 Minutes, called the sacred area a “hole in the ground” which resulted in an angry New York and an upset country still smarting after 9/11.

Yesterday, he was the same person who at a post-Katrina press conference pleaded that reporters stop writing negative reports about the city, that the perception was causing bad national press and that it would reduce the city’s chance to recover. After his admonishment, and moments later, he referred to the New Orleans business community as being the “Superdome of Prostitutes”.

He was the same politician who preceding his post-storm re-election called his city which was already becoming a magnet for racial discord, the infamous “chocolate city”.

Yet, it was also a totally different Ray Nagin.

Before the wheels of Katrina came barreling towards the coast, Nagin was admired by the media and the business community.

He was a man who could do little harm. He was a person who took on an upset group of black ministers in a church in a speech on the eve of Martin Luther King Day and then essentially days later made the exact same speech in front of a clapping Chamber of Commerce.

But now, he was different.

It showed in his face, his voice and in his words when he said that he made mistakes while a few years ago he refused to acknowledge any errors.

More than any other moment, after talking about his fumbles, he remarked that before Katrina, he was the “darling of you guys and I lost all of that”.

Shaking his head once again, the now solemn and more sober ex-New Orleans leader repeated “I wish that wouldn’t have happened…but you know, it’s destiny…and, you know, I would just have to deal with it and try to move forward”.

So, in many ways, Mayor Nagin was the same person who once was the “Great White Hope” and who is now hopes the New Orleans white community would become more accepting of blacks and other minorities.

He is the same Mayor who wants to move forward while writing and conveying his view of the past.

It is the same Nagin who first entered the political scene by being the friend of the media but now ending his press conference asking the press to read his book and then meet with him afterwards and talk “live stuff”, “live stuff”—without taping and without the editors.

C. Ray Nagin, the New Orleans Mayor who weathered a catastrophic storm, who is now selling his book and his legacy marred by scandal and Katrina by his words and actions makes little secret that he is “live stuff” and is living the stuff of his own history which he now wishes ended differently.

Nagin discusses why he wrote the book and gives details about the individual chapters of the book, Katrina Secrets: Storm After The Storm

Watch two other remarkable videos from the press conference

Do you agree with the columnist?

More in this category: « Is New Orleans Saints QB Drew Brees On The Rebound? Nagin Re-Colors History With Book About Katrina and New Orleans »
back to top