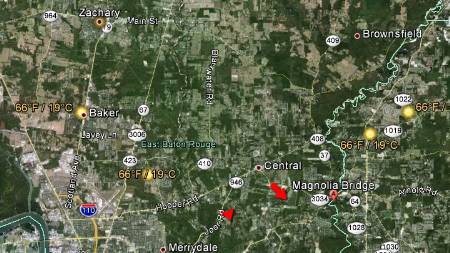 The project replaced the old two-lane La. 64 Magnolia River Bridge with a new four-lane structure. In addition, La. 64 was widened from Greenwell Springs Road to La. 1019. The new bridge has two 12-foot travel lanes in each direction and 10-foot outside shoulders. Roughly 26,000 drivers travel this bridge daily.

Governor Jindal said, “This project is great news for the Capital Region. The Magnolia River Bridge is a critical route for residents between Livingston and East Baton Rouge parishes. This project will improve safety for drivers, speed up commutes and make the Capital Region more accessible to the rest of the state and the country. Indeed, upgrading our infrastructure not only makes our roads safer for our families and speeds up commutes for our people, but it also helps companies access our cities and towns more easily. That makes our state more attractive for companies who want to invest and create jobs and it’s why we’ve invested historic amounts to improve our roads and bridges.”

The $19.9 million Magnolia River Bridge project was funded through an innovative cash management plan developed by Governor Jindal and DOTD in 2009 to accelerate road work across the state by freeing up $120 million in identified cash balances to advance construction projects from their original bid dates.  Gasoline revenue projections vary from year-to-year, and as a result, project budgets can often be over budgeted, resulting in un-used operational funds and an undesignated fund balance.  Funding through the cash management program comes from these over collected revenues from existing project budgets across the state, which allows dollars to be shifted to other projects.

Governor Jindal said the Magnolia Bridge provides a convenient route for residents of Livingston Parish to commute to jobs in Baton Rouge.  Additionally, the Governor said the bridge plays an important role in stimulating development along La. 16 between Denham Springs and Watson, and provides an alternate route for the trucking industry to and from Baton Rouge.

DOTD Secretary Sherri H. LeBas said, “The cooperative efforts of the Jindal Administration, legislators and local entities enables opportunities such as the Magnolia River Bridge project to become a reality, and I am thankful for our shared commitment to improve Louisiana’s transportation network.”

Since 2008, the Jindal Administration has made improving the state’s transportation infrastructure a top priority by investing an unprecedented $4.8 billion in projects across the state, which includes more than 5,200 miles of roadway and bridge improvements.

“I am happy to be here today to celebrate another win for Livingston Parish.  Combined with the newly widened I-12, drivers will see significant benefits in their daily commutes,” said Livingston Parish President Layton Ricks.