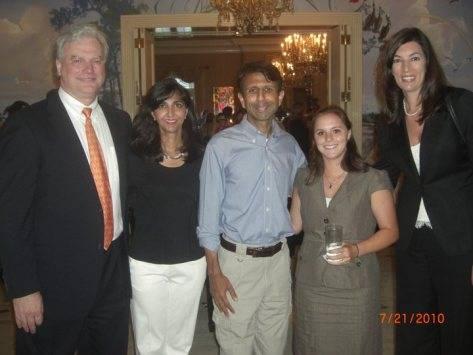 No doubt, elected Judges can be disinterested and impartial adjudicators of facts and interpreters of law.

Not knowing  Judge Timothy Kelley who is now hearing the legal challenges to Governor Bobby Jindal's prized education reform and voucher program, I personally have no reason to doubt that he will put all political influences aside.

However, Law school student Lamar White, publisher of CenLar.com makes an interesting argument that Judge Kelly's judicial decision will be predicated upon his own personal and political biases and his relationship to current and former Jindal Administration members.

Whether the Judge decides the case fairly and without prejudice ultimately remains to be seen by his ruling and his reasons, which might occur today.  One thing is for certain--should Judge Kelley find in favor of the Jindal administration, based upon the claims outlined by Lamar, some of those opposing the Jindal reform package will openly question the purity of the court's decision.

1. Former general counsel for the Governor Jindal, Jimmy Faircloth's law firm which bears his name, who is now attorney arguing in favor of the Jindal reform gave a one thousand dollar contribution to Kelly's Supreme Court campaign. Tjhat check was cashed slightly over one month ago.

2. Kelly is married to Angelle Davis, the former Commissioner of Administration for Jindal. Davis currently is the CEO of the Davis Kelley Group, a consultancy that, among other things, claims to specialize in government affairs.

3. When running for Supreme Court, Kelley made certain statements about political power, influence and political influence.  Lamar appears to be questioning whether the Judge can be bound by his own campaign assertions.

Unquestionably, Jindal's political future hinges upon this high-profile legislation which he and others have touted during his recent campaigning on the national stage this year.  In fact, it is the most important piece of legislation emanating out of his administration to which he might be able to point should he run for statewide or national elective office.  The legal validity of the legislation takes on an even greater weight since he presides over the Republican Governors Association and because his reputation is at center stage during his national television appearances and his statements to the national media.

While his attorneys were making the case in front of the elective judge, Jindal was making his own case before a national audience.

The Louisiana Governor’s opinion piece “Now more than ever, we need to put students first” was published Thursday in the "Daily Caller", a national political publication.

In highlighting his education reform, he wrote, “At first they tried to challenge us at the ballot box by voting for status quo candidates for the state board of education, but Louisianians voted for reform candidates. Then they tried in the Legislature, but Democrats and Republicans voted for reform legislation. They tried recalling the reformers and failed. They even said that poor parents “have no clue” how to choose a school for their children. And now they are making a last-ditch effort to stifle our reforms in court. We expect reform to prevail again in court this week.

The opponents of reform want to go backwards. They want to go back to the days of more schools failing and they want to disenfranchise the thousands of students who are already taking advantage of our reforms to get a chance at a great education. To take from students an opportunity they so badly need, and thoroughly deserve, would certainly be unjust.”

Jindal did not stop in trying to convince the national audience about his legislation most who know absolutely zero about the law  or that a case is now being heard.  In making his own argument before the court of public opinion, the Louisiana went further by sending  a copy of the published letter to his “Team” campaign database.  Presumably, the Kelleys and others are on his mailiing list as the Judge and his wife are certainly politically active, especially given the Judge's own political run for the state's highest court.

While Jindal had every right to publish such a piece nationally and then to circulate it locally, even the most dispassionate must wonder why he would do so now.  Is there pending legislation or other events in Washington DC or elsewhere focusing upon education reform other than the trials occurring in Louisiana and being heard the same day as the publishing of his column and the e-blasting of it to his followers?

Once Judge Kelley makes his ruling which could come today, should he find in favor of the governor, you can bet that the opposition will complain that the case was influenced by more than the merits of the facts and the law.  The Governor's column and e-blast certainly does not diminish the argument that justice is blinded by the best and closest of political connections.

According to a recent campaign finance disclosure published by the Louisiana Ethics Administration, on October 24, 2012, Jimmy Faircloth, the Alexandria-based attorney and the former executive counsel to Governor Bobby Jindal, donated $1,000 to Judge Tim Kelley.

Why is this significant? Quoting from The Times-Picayune (bold mine):

Louisiana Gov. Bobby Jindal’s recent education overhaul had its first day in court Wednesday, with lawyers for and against the voucher program changes calling witnesses to the 19th Judicial Court in Baton Rouge. Even before the opening statements were made,presiding Judge Timothy Kelley said he was confident he could make a ruling on the overhaul’s constitutionality by the week’s end.

“I don’t anticipate the need for post-trial briefs. I anticipate that after you all make a presentation, I will be able to make a ruling on this,” he said briefly after court was called into session at 9:00 a.m.

You got that? Even before a single argument was made, Judge Kelley made it abundantly clear that, essentially, he’d already made up his mind.

Guess who represents the Jindal administration?

Faircloth made the donation to Judge Kelley through his law firm, Faircloth Law Group LLC, and although his donation doesn’t likely violate any campaign finance or ethics laws, at the very least, it should raise some serious questions, particularly considering that Faircloth’s check was cashed only a month ago.

A few months ago, Judge Kelley blocked an injunction against the voucher program, a decision that seems to have been based entirely on the testimony by Superintendent John White and Jimmy Faircloth, both of whom disingenuously argued that an injunction would have resulted in $3.4 billion in deficit spending. From Casey Michel at Talking Points Memo (bold mine):

A Louisiana judge won’t stop the state’s controversial school voucher systemfrom going into effect next month. District Judge Tim Kelley ruled that he did not have jurisdiction to provide the injunction sought by the voucher program’s opponents, citing a Louisiana law prohibiting injunctions that state officials claim will create a deficit.

Superintendent John White and Commissioner of Administration Paul Rainwater made just such a claim, saying that enacting an injunction on the voucher program, for which 8,000 students have already applied, would lead to a $3.4 billion hole in the state’s education budget.

The figure stems from the $3.4 billion Louisiana currently spends on state aid for school operations via the Minimum Foundation Program. Jimmy Faircloth, who represented the state during Tuesday’s hearing, said it was “unavoidable and factually inescapable” that the proposed injunction would lead to the ten-figure deficit. “It’s just indisputable,” he said, according to Baton Rouge newspaper The Advocate.

It is also worth noting: Judge Kelley is a benefactor of the Dunham School, a school that currently participates in the school voucher program. According to some reports, the school’s softball field was recently renamed in honor of the Kelly Family for their sustained financial contributions over the years.

And perhaps most notably, Judge Kelley is married to Angele Davis-Kelley, Governor Bobby Jindal’s former Commissioner of Administration, who currently serves as the CEO of the Davis Kelley Group, a consultancy that, among other things, claims to specialize in government affairs. The Davis Kelley Group appears to be housed in the middle of Baton Rouge:

Judge Kelley, just like Jimmy Faircloth once did, recently and unsuccessfully campaigned for Louisiana Supreme Court, even bringing out former Governor Mike Foster as a campaign surrogate. This ad was cut only a month ago:

Over the past 15 years, I have served as your District Court Judge. In this job, I have presided over nearly 600 criminal and civil trials – jury trials and bench trials. And I have presided in hundreds of appeals from agency rulings. As District Judge, I have heard and presided over some of the most complicated tax matters, medical malpractice cases, murder trials, drug cases, product liability cases, rape trials, successions, burglaries, property disputes, armed robberies and hundreds of others. I have sentenced people to serve life terms in prison. And yes, I have had to sentence one to death by lethal injection.

All of this experience is important because on the Supreme Court, our Justices must and do hear and decide on all of these kinds of issues. These are difficult times, not only in Louisiana but across America. I firmly believe our courts are in
place not to make new laws, but to fairly and consistently apply those that are on the books. That is what I do each and every day in District Court. It is precisely what I will do if elected to the Louisiana Supreme Court.
Justice cannot or should not be manipulated by powerful political or other interests. In all of our courts, but particularly in the Supreme Court, cases and decisions must be made based on one thing and one thing alone: the law. I know the law, as do many other judges and attorneys. And I also know how to apply it fairly in cases that affect the very lives and futures of people – real, everyday people.I am in this race for the Louisiana Supreme Court, not because I am the best politically connected candidate, but because I believe that I am the best qualified. I will work hard over the next two months to prove that to the voters and families of our District 5. On the Louisiana Supreme Court, the last stop for most cases in Louisiana, qualifications and hard work do matter.

Given all of this, which may not prove any impropriety but still, unquestionably, creates the appearance of impropriety, the impression, even if misguided, of a quid-pro-quo patronage system between Judge Kelley and current and former members of the Jindal administration, one of whom is his wife and the other is his wife’s former colleague, Jindal’s current attorney on voucher challenges and one of the judge’s top campaign contributors, it is astonishingly strident and somewhat alarming that neither Jindal nor the judge himself ever acknowledged these multiple conflicts and submitted a recusal.

Remember the “Gold Standard” of ethics that Governor Jindal championed?

Yeah, neither does he.

Read the original column on CenLamar.com