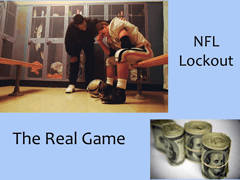 Labor dispute should be over by Monday or Tuesday. There's a lot of legal work to be done for the final details involving billions of dollars.

NFL can't afford to miss any games and play will go on as usual this season.

The Saints receivers as a group are the best in the NFL.

And the Saints have only four prominent wide receivers. However, when you consider that the team had three pass-catching tight ends -- Jeremy Shockey, David Thomas and Jimmy Graham -- and four running backs -- Reggie Bush, Pierre Thomas, Ladell Betts and Julius Jones -- with at least 10 receptions it makes a lot of sense.

With Mark Ingram's tough running, the Saints will have the No. 1 offense in the league. These rankings are from Cian Fahey, a Patriots columnist who writes for Bleacher Report and The Magazine.

Writes Fahey: "The Drew Brees policy of throwing to the open receiver and not forcing the pass to his best receivers only works because of the talent that is at the end of his throws. It is not difficult to identify that Marques Colston is the team' best receiver, but it is snot as glaringly obvious with the Saints as it is with most other teams."

Colston fits perfectly in the Saints' scheme because he runs the complete route tree and has an incredible mixture of size and speed. He's 6-foot-4 and his agility is excellent which makes him a legitimate jump ball receiver. He catches the ball consistently and is a receiver without any major flaws.

Stats are not the best way to analyze the Saints because of their willingness to find the open receiver. Colston is the only Saints receiver to gain more than 1,000 yards receiving last season. He had done that four of his five seasons. He missed reaching that milestone because he was on the sidelines recovering from injuries for nine games.

Lance Moore statistically was the Saints second-best receiver season. He's a free agent this season but Brees will do everything in his power to bring him back. Moore specializes in being a possession receiver and has the ability to made defenders miss when he has the ball which can lead to big gains.

Devery Henderson also is a big gainer despite a downer season in 2010. He still averages 18.6 yards per catch throughout his career. His 77-yard touchown reception in the playoffs reminded the coaches of his ability, which was lacking during the regular season.

Robert Meachem is Brees' third choice as a receiver. He would be a No. 2 receiver on most NFL teams. He has reliable hands and runs good routes. Meachem is waiting for his opportunity to move up on the depth chart and gain the opportunities he needs to succeed.

Brees doesn't favor any target over another because of the Saints consistency and depth.

Saints safety Roman Harper on Gregg Williams' aggressive 4-3 defense: "You've got to tip your hat to Gregg and his scheme, his aggressiveness. One of things he's not going to do is just let you line up and run the ball. You're going to have to pick it up and throw it and that's what you want. You can't win games with teams running it down your throat, chewing up the clock and gaining time of possession or else your offense feels pressure like they've got to do too much.

"You've got to put pressure on these guys, throw off the timing of the quarterback and you've got to disrupt them any way you can. Blitzing, pass coverage, anything. Gregg understands that and we play smarter defense against the run with guys in the box and we try to stay in our gaps. We just understand what teams like to do in certain situations and that's what we play towards. We’re not going to let them do things they love doing on the field against our defense, As a defense, understanding what we're trying to take away and what we're allowing them to have is the game.",,,

Three LSU players -- cornerbacks Tyrann Mathieu and Morriue Claiborne and linebacker Ryan Baker are on the watch list for the 2011 Bednarik Award, which goes annually to the best college defensive player. LSU cornerback Patrick Peterson won the award last season. Tulane's Ryan Grant and LSU's Rueben Randle are on the watch list for the Biletnikoff Award, which goes to the top wide receiver in college football...Whatever happened to former Saints running back Tony Gabreath?...Parting thought: "I wouldn't do volunteer work if they paid me."

RIP: John Mackey, former Baltimore Colts tight end and a Hall of Famer, has passed away. He was 69 and finished his life living in an assisted living facility because of dementia. He was formerly president of the NFL's players association.