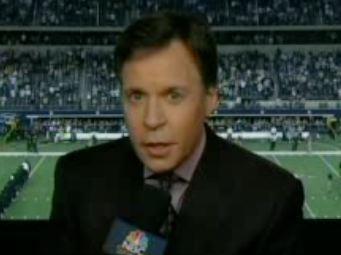 Kansas City Chiefs linebacker Jovon Belcher killed his girlfriend and then committed suicide in front of his coach and general manager. It was a horrible incident that has shocked people throughout the country.

Instead of grieving for the victim and her family, Costas decided to impose his liberal political views on millions of viewers who tuned in to watch football.

The NFL is the most popular professional sports league in the country. Americans enjoy watching the action, following their favorite teams and escaping from the problems they face in their everyday lives. Americans who watch Sunday Night Football don’t tune in to hear sports anchors editorialize about gun control.

Thus, it is no surprise that so many people are upset at Bob Costas for his gun control commentary the other night. Americans are tired of the liberal media lecturing us about their politically correct agenda, including gun control.

During his 90 second diatribe against handguns, Costas quoted from columnist Jason Whitlock, who wrote, “Handguns do not enhance our safety. They exacerbate our flaws, tempt us to escalate arguments, and bait us into embracing confrontation rather than avoiding it. In the coming days, Jovan Belcher’s actions, (and its possible connection to football), will be analyzed. Who knows? But here…is what I believe, If Jovan Belcher didn’t possess a gun, he and Kasandra Perkins would both be alive today.”

In fact, no one, not Whitlock, Costas or anyone else, knows whether Belcher would be alive today without a handgun. As a large and powerful NFL player Belcher could have easily killed his girlfriend with another type of weapon or with his own hands.

It is despicable that Costas would use this tragedy to pursue a gun control agenda. Obviously, the handgun issue is a contentious one in our country, but we do have the 2nd Amendment which guarantees the right of every American to bear arms.

Used responsibly, guns can protect people and property and save lives. In this tragedy, the ultimate responsibility lies with Mr. Belcher, who committed this heinous act.  Instead of placing the blame on the perpetrator, Costas decided to blame guns, a convenient target for liberals.

On NBC, Costas is not the only liberal; in fact he has plenty of company. This is the network that owns the far left cable station MSNBC and pays liberal Brian Williams to host the nightly news program.

If Costas wants to start a career as a commentator, he can host a program on MSNBC. The network would love to add him to a line-up that includes other liberal blowhards like Chris Matthews and Ed Schultz.

Otherwise, Costas should stick to sports, his area of supposed expertise, and allow Americans to enjoy football games in peace without another liberal lecture ruining the evening.

More in this category: « Prince William and Kate Middleton's baby has world pregnant with joy, curiosity Intriguing Polls on Fiscal Cliff, Susan Rice and Senate Filibuster »
back to top