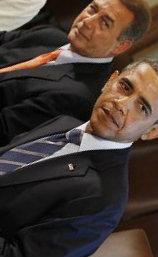 With the fiscal cliff in our backyard, do the voters want to cut spending, entitlments or both?

How does the nation feel about Susan Rice who is under fire for her comments about the Libya consulate?  Do the voters want to change the rules in the U.S. Senate over filibustering which is an action being supported by the Democrats and offered by Senate Majority Leader Harry Reid?

For the answers to these questions, take a look at the most recent polls provided to Bayoubuzz by Ron Faucheux, President and CEO of Clarus:

"I'm going to read you some government programs whose spending could be cut reduce the federal budget deficit. As I read each one, please tell me if you think spending should be cut back a lot, some, or not at all to help reduce the deficit."

"As you may know, Congress is considering ways to reduce the federal deficit over the next decade. Which ONE of the following three options to reduce the deficit would you most prefer?"

Asked of adults nationwide: "As you may know, President Obama is considering nominating Susan Rice, the U.S. ambassador to the United Nations, to be Secretary of State. Some Republicans oppose her nomination because they say she provided misleading information about the role of terrorists in the recent attack on the U.S. consulate in Benghazi, Libya. Democrats say Rice was only relying on information about the attack provided to her at the time and that the president is entitled to place his own choice in the position. If the president nominates Rice as Secretary of State do you think the Senate should confirm her nomination or reject her nomination?"

Asked of adults nationwide: "As you may know, the Senate operates under procedures that effectively require 60 votes, out of 100, for most legislation to pass. This allows a minority of as few as 41 senators to block a majority. Do you think this procedure should remain in place, or do you think it should be changed so that legislation is passed with a simple majority?"

What year was the most recent amendment to the U.S. Constitution ratified, and what did the amendment do?

The 27th Amendment, ratified in 1992: "No law, varying the compensation for the services of the Senators and Representatives, shall take effect, until an election of Representatives shall have intervened."