Obama plays footsy on edge of the Fiscal Cliff 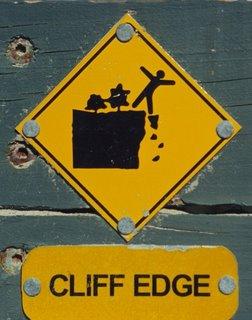 With the end of the election season many people were hopeful that the politicking would cease, and the process of governing would begin.

The hope was that President Obama would take his re-election as a mandate to work in a bipartisan way with Congress to address America’s most pressing problems.  After all, republicans won the House of Representatives giving them a seat at the table when legislation is discussed.  It was hoped that the “my way or the highway” approach of the Obama administration in its first term would be abandoned for the principles of sound governing and a legacy for a president who promised “change” to America.  Based on the antics of both the president and the congress such hopes appear dashed for now.

Let’s put the fiscal cliff in perspective.  The United States spends money like a socialist state providing everything to everyone.  It taxes its people, however, as if the nation had a balanced budget.  Despite what President Obama, democrats, or republicans may say there are only two ways to solve this conflict.  One is to cut spending to meet revenue.  The second way is to raise taxes on everyone, upper income earners, middle income earners, and lower income earners, to raise sufficient revenue to pay for the free spending nation we have become.  These are the only two ways out of our fiscal nightmare.

The United States spends $11 for every $7 it collects in taxes.  The budget deficit exceeds $1.1 trillion, and the national debt has risen to more than $16.2 trillion.  It is projected to rise to more than $20 trillion in four years.  Government spending is out of control, and Washington must get a handle on it or our nation will literally go broke.

The president’s answer is higher taxes on the top 2% of income earners.  But this does not make a dent in the spending spree Washington has put this nation on, but it sounds good at a rally and in the polls.  The fact is the top 1% of earners already pays nearly 40% of all income taxes.  Obama’s increased income taxes coupled with the higher taxes imposed by Obama Care and a growing litany of new government regulations will absolutely have a negative impact on jobs, job creation, and the economy.  President Obama is also proposing massive new stimulus and spending programs.  Many people don’t understand that in the president’s mind. higher taxes are not so bad because higher taxes allow him to spend more money.  One thing is for certain.  The president believes that America should be more like Europe, and he is moving us in that direction.

Republicans, on the other hand, oppose higher tax rates saying such tax increases will hurt employment and job creation.  And they are correct.  In addition republicans are opposed to massive new spending programs and more government regulations.  They are correct on this front too because America cannot afford its current spending habits and certainly cannot afford increased spending and more regulations which will only increase our debt load bringing America closer to the edge of bankruptcy.

It is time for the politics and posturing to stop.  President Obama needs to stay in Washington and hammer out a deal that will pass both houses of congress.  He must stop his campaign style rallies and work with republicans to put a deal in place.  He will not get all that he wants, and republicans will not get all they want.  The president needs to understand that republicans won the House of Representatives.  Republicans need to understand that democrats won the White House and the Senate, a body they should have won but for several very bad candidates.

The real answer is a major overhaul of the tax code.  Tax rates should be dramatically lowered.  A higher standard deduction should be made available to protect low income wage earners.  The number of deductions should be minimal.  Home mortgage interest, property taxes, and charitable deductions should be maintained.  All others should be looked at with a skeptical eye.  If tax rates are low enough no one will care about deductions which are most important when rates are high. This is the revenue side.  We need a tax code people can understand.

On the spending side, a program of balancing the budget must be put in place immediately.  Whatever reforms that are needed for Social Security, Medicare, and Medicaid must be enacted.  Financing these programs for just 20 years down the road is poor planning.  The programs need to be made solvent and the sooner we head down the road to solvency the better and easier it will be to accomplish.  Remember that if these programs are not reformed, they will go broke; and the people who rely on them will not benefit from them either because their benefits will not cover the cost of groceries in a hyper inflationary economy or because the programs are broke and have no money at all to pay out.

Lastly, the parties must address the accumulated debt of our nation.  We need to pay it down.  As the economy improves the payment of the debt will become easier.  But regardless of that we must stop adding to the debt as we are doing now.

Tough decisions must be made.  Spending must be cut, and tax rates lowered to encourage job growth and expansion, and the tax code simplified.  Solid fiscal policy is needed now more than ever.  Continuing to spend recklessly as America is doing will mean that those who are dependent on government programs to live will not have a program to rely on because there will be no money to pay for it.

The behavior of our politicians in Washington is an embarrassment. The American people deserve better from our leaders.  Let’s hope we get leadership, and that the fiscal cliff is avoided.  At this point, hope, is all we have left.