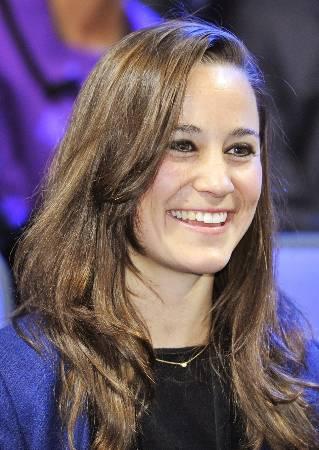 Now that Prince William and Kate Middleton have produced a fetus that has survived for about eight weeks, the British newspapers are pondering what kind of parents the royal couple will make.

Much is written about William’s royal upbringing, the nannies, his parents’ bickering, his mother’s crying, his father’s alleged aloofness, and how this may affect his ability to parent the hoped-for new baby.

But Kate’s abilities are popularly believed to be "normal." Whatever "normal" means. "By contrast," the Daily Express surmises, "the Middleton family seems to have been a model of middle-class solidity and comfort" – "it’s very ordinariness was a million miles from the spotlit environment in which the new prince or princess will necessarily have to grow up."

There seems to be a lot about the Middletons we don’t know.

Is it part of "middle class solidity and comfort" to not have one child who is actually employed at a genuine job?

Despite their apparent wealth and college educations, none of the Middleton children work at jobs or in professions. Instead, they are "creative." Fashionable Pippa allegedly wrote a party-planning book that says things like, "Because of their size, turkeys are perfect for feeding larger gatherings," and "When hosting a party, move any clutter from the space where you're entertaining." And wait, there’s more from Pippa, like,"For Halloween, a pointy hat, fake hair and a broom [make] a witch's outfit." She also advises that "tea bags should go in the teapot." And Pippa informs us how to undertake an Easter egg hunt: "An adult hides a selection of eggs. They should be low down within easy reach of children."

Jilly Anderson, a famous but far less photogenic U.K. writer (whose sister is not married to the heir of the heir apparent to the British throne), basically said that Pippa’s book was pathetically poorly put together (oh man, did I just write that?), and that Penguin’s editors were "slitting their wrists" over the money they’d paid Pippa.

If Prince William and Kate’s fetus goes to full term (and we sincerely hope it does become an actual baby), we wish it well. But the notion that the Middletons will be this baby’s source of "middle class solidity and comfort" seems ill-placed. Is it "middle class" to spend thousands of dollars on a vacation cottage on Mustique for a week? Do "middle class" solid folks put in bids on genuine Tudor estates? Do they yell and publicly berate big-name dress designers like Kate’s mother, Carole, did when she accused Linda Cierach, the London-based couturier best known for making the Duchess of York’s wedding dress, of being ‘unaccommodating’ and dramatically withdrew her business just weeks before the wedding? Since Ms. Cierach’s high-end creations like Carole’s mother-of-the-bride outfit (that she ordered but refused to wear) clock in at $5,000.00 for starters, is this evidence that the Middletons are solidly "middle class?"

And what about Carole’s brother, Gary Goldsmith, and his cocaine-sniffing sex parties on the Spanish resort island of Ibiza?If the Middletons were in America, a lot of eyebrows would be raised at their claims to have made their money through their home-based party business, wherein party favors, paper tablecloths, sacks of uninflated balloons and the like are put into boxes and mailed to people planning parties. Maybe they really did make their millions that way–who knows for sure?

But for most people, there would have to be something more in the box for anyone to make millions on kiddie party favors.

The biggest proof of the Middletons’ lack of the very thing they are so lauded for, "middle class solidity and comfort," is that they allowed, and perhaps even encouraged, their daughter Kate to basically become Prince William’s courtesan and mistress for almost a decade before she became even his fiancé. Would true middle class folks do this? No! They’d tell Kate to get a proper job that actually paid the rent and kept the lights on, stop mooching, and find a man who appreciates the cow’s milk enough to buy her and bring her home with him.

Yeah, yeah, yeah–listen, we all know that this is a different day and age. But if a newspaper claims that the Middletons represent the be-all end-all of "middle class solidity and comfort," they really need to take another look.

The new royal fetus of Prince William and Kate will have a less-distinguished parentage than its relatives and other future fetuses from the more established royal couples, but will it be more rooted in "middle class solidity and comfort" because of its Middleton relatives?

More in this category: « If Princess Diana had followed the equerry’s advice Treasurer Kennedy talks Louisiana budget, Medicaid cuts and Charity Hospital plan »
back to top