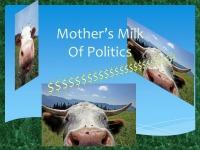 So, who's been "milking" the cash cows?

Lou Gehrig Burnett, the publisher of Fax-Net, has detailed the money flow into the elections buckets for those contemplating or absolutely running to serve in the green grass of state government this year.

Who’s got the money?
Are you thinking about running for a statewide office?  Before you do, take a look at how much money some incumbents and challengers have raised for the elections to be held this fall.
Candidates running for statewide office had to report how much they raised through July 14 in their latest campaign finance reports filed with the Louisiana Ethics Commission.
Unfortunately, we won’t know how much money candidates running for state legislative offices and local offices have in their campaigns for a while.  They are not required to file a campaign finance report until September 15.  The primary election is October 22.

Here is a brief rundown on how much money candidates for statewide office had in their campaign coffers as of July 14:
Governor’s Race
*Republican Gov. Bobby Jindal, seeking a second term – $8.8 million.
*Republican Tara Hollis of Claiborne Parish, who is challenging Jindal – $965.
*Ron Ceasar, an independent who says he is  running for governor – No report on file.
* Democratic state Rep, Rob Marionneaux, who is thinking about running – $209,911 as of Dec.  31, 2010.
Lt.  Governor’s Race
*Incumbent Republican Lt. Gov. Jay Dardenne – $524,002.
*Republican Billy Nungesser, Plaquemines Parish president, who is definitely running – $1.1 million.
Secretary of State’s Race
*Incumbent Republican Secretary of State Tom Schedler – $171,150.
*Republican state Rep. Walker Hines of New Orleans, who has declared he is running – $205,737.
*Republican Scott Angelle, who is considering the race – $437,000.
*Republican Speaker of the Louisiana House Jim Guy Tucker, who has announced – $181,213.
*Democrat Caroline Fayard, who is considering the race – $19,453.
Attorney General’s Race
*Incumbent Republican Attorney General James D. “Buddy” Caldwell – $479,599.  (Caldwell held a fundraiser in Shreveport this past Thursday at Ernest’s Orleans Restaurant, which drew a good crowd.)
*Former Republican U.S. Rep. Joseph Cao of New Orleans, who is expected to qualify – $104,868.
*Democratic President of the Louisiana State Senate Joel Chaisson, who is thinking about the race,  $138,743.
State Treasurer’s Race
*Incumbent Republican Treasurer John Kennedy, who has no opposition so far – $1,897,817.
Commissioner of Agriculture and Forestry
*Incumbent Republican Commissioner Mike Strain, who has no opposition so far – $431,384.
Commissioner of Insurance
*Incumbent Republican Commissioner Jim Donelon, who has no opposition so far – $619,471.
And then there’s John Georges, the wealthy Jefferson Parish businessman.  He had put $10.1 million in a campaign fund for a possible run for a “statewide office.”
However, his latest report shows he has repaid himself that amount and currently has $0 on hand in his campaign fund.  That could mean he has decided to forgo a race for statewide office this time around.

FAX-NET UPDATE is published weekly and delivered to your home or office by fax or e-mail. Subscription rates are: $50 for 12 months (50 issues) or $35 for six months. To subscribe, send check or money order to: Fax-Net Update, P.O. Box 44522, Shreveport, LA 71134. If you have questions, tips or want to do a guest column, call 861-0552 or send e-mail to louburnettatcomcast.net. Lou Gehrig Burnett, Publisher.