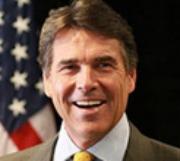 Texas Governor Rick Perry has announced for President.  The dynamic of the race for the Republican nomination has now changed.  All eyes will now focus in on former Massachusetts Governor Mitt Romney, Congresswoman Michele Bachmann, and Gov. Perry as the candidates best positioned to win the nomination.

Governor Perry’s announcement in South Carolina was outstanding.  He hit the high notes of what Republican primary voters are looking for in a Presidential candidate, bringing our economy back, more jobs for Americans, lower taxes, the repeal of Obama Care, a smaller, leaner, more efficient federal government, and the security of our borders.  He talked about how “spreading the wealth” punishes success and sets America on a course of even more dependency on the federal government.  Rick Perry looked like a President, sounded like a President, and inspired like a President should.

In addition, Rick Perry is acceptable to the Republican base, the social and fiscal conservatives who vote in Republican primaries.  Of course, he will have to make sure he does not come across as a right wing ideologue that is too extreme on the issues.  This would be a problem in the general election against Barack Obama.  But I don’t believe that Rick Perry will fall victim to this trap.  Unlike Obama, Perry is an experienced, seasoned politician serving as governor of the second largest state in the country.  More importantly, he exudes a Presidential aura.  Unlike President Obama who speaks angrily about America and blames Congress and everyone else for his own shortcomings, Perry comes across as someone who understands our problems and wants to fix them.

Mitt Romney has been running for President for five years.  He lost the nomination in 2008 to Senator John McCain but never stopped running.  He is certainly qualified to be President.  But unlike Perry, Romney is not inspiring or exciting.  In his announcement Rick Perry was inspirational.  He didn’t give a speech.  He spoke to his audience as if he was in their living rooms.  He was conversational and not stiff.  He spoke with his audience not to his audience.  His delivery was reminiscent of Ronald Reagan.  He made you feel good about yourself and America.

Michele Bachmann may be odd man out.  Bachmann may have trouble once she leaves Iowa, and the nomination campaign heads south after leaving New Hampshire where Romney is expected to do very well.  With Perry in the race Bachmann has a challenger to her conservative principles and an opponent with experience running a large state.  Perry has what Michele Bachmann has and a lot more.

The Iowa straw vote is over and the winner is Rep. Michele Bachmann with 28% of the vote.  Congressman Ron Paul received 27% and former Minnesota Governor Tim Pawlenty got 13%.  Before anyone gets too excited about the outcome, remember that this vote is meaningless and is no indication of who will get the Republican nomination.  The top finishers will claim a great victory.  But this was simply a beauty contest to see which candidate could get his or her supporters to show up and vote in greater numbers than the other guy’s supporters.  The real contest will begin next year with the Iowa caucus itself.  Then it is on to New Hampshire and South Carolina.

It is certainly too early to count anyone out.  But when you look at the candidates, their strengths and weaknesses, and despite all of today’s hoopla, it may just be that the Republican nomination is Rick Perry’s to lose.  We shall see.

After Debt Ceiling Crises, Balanced Budget Amendment Is Change We Believe In

Obama's Leadership Is AWOL As Budget, Deficit Goes Up Wall

Tea Party Has Its Candidate With Bachmann, Does The GOP?

Huckabee’s Out, Gingrich and Paul Are In: Let The Games Begin