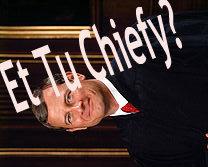 Another supposed conservative Supreme Court justice has turned to the left. Chief Justice John Roberts has joined the ignominious list of Republican Supreme Court appointments who betrayed the conservative movement. The Supreme Court Justice Hall of Shame continues to grow with Roberts joining other turncoats such as John Paul Stevens and David Souter.

In two stunning decisions this week, Roberts joined with the liberal wing of the Supreme Court to provide major victories for the Obama administration. On Monday, the Supreme Court struck down most of Arizona’s illegal immigration law designed to deal with a problem that the federal government refuses to address. Yesterday, a Robert led coalition of five justices upheld the most controversial bill of the Obama era and this generation, the Affordable Care Act, a.k.a. socialized medicine.

According to Peter Ferrera of the American Civil Rights Union, the Supreme Court “affirmed the fundamental dishonesty of our politics.” The President initially maintained in TV interviews and in various speeches that the individual mandate component of the bill was not a tax. Incredibly, Chief Justice Roberts argued that the only reason the bill was constitutional was precisely because it was a tax.

It is quite absurd that Roberts felt compelled to “save” the bill for President Obama by calling it a tax, since Obama never used that language. The President did not campaign on that language and Congress did not utter the “tax” phrase when it was being debated on Capitol Hill. Ironically, Obama has a history of saying one thing and doing another on the healthcare issue. He campaigned against the individual mandate in the 2008 Democratic primaries, but pushed it once he became President.

Sadly, the President lied to the American people and the Chief Justice and his four liberal colleagues provided him with the legal cover. In Ferrera’s view, “The President intimidated Chief Justice John Roberts like Hugo Chavez intimidates the Venezuelan Supreme Court. The Rule of Law is now dead. The American people have only one more chance now to save their country.”

The last opportunity is the November 6, 2012 election. If Mitt Romney prevails and if he is granted a Republican majority in Congress, he has an opportunity to repeal this law. Fortunately, most of the bill is not implemented until 2014, which gives the American people time to make a political correction. Unfortunately, the Supreme Court failed in its responsibility yesterday to reject this blatantly unconstitutional legislation.

Although the decision was quite disturbing, there were a few silver linings. In a blow to the Obama administration, the Court ruled the Commerce Clause cannot be used by Congress to force Americans to purchase products such as health insurance. This is the same argument made by over two dozen states that filed suit to prevent the implementation of the Affordable Care Act. The Court also overturned the Medicaid mandate portion of the bill. This expensive provision would have forced states to accept new Medicaid funding and the Court ruled that it violated the Coercion Doctrine.

Overall, the decision was a sad day for Americans who care about liberty and limited government. This is another in a line long of attacks on our U.S. Constitution and a clear erosion of our freedom as Americans. In the view of U.S. Congressman Paul Broun, M.D. (R-GA), the decision will “ultimately destroy the best healthcare system in the world….Even worse, I fear that the High Court has opened Pandora’s box by blatantly disregarding the law, and there will no longer be any real limits to what the federal government will be able to force the American people to do.”

This act will clearly increase healthcare costs, place a tax on the American people, force employers to stop providing healthcare coverage and place more medical practices under the auspices of the federal government. It is a recipe for disaster which is the case in other socialist countries that have succumbed to the poison of government run healthcare.

With the law, for the first time in our history, Americans will be forced to purchase a product, health insurance or face a tax. A future administration may force Americans to purchase certain types of food, clothing, vehicles, or housing.

The sky is the limit now for the advocates of more government control. To think that supposed “strict constructionist” Chief Justice John Roberts not only provided the deciding vote in this case, but wrote the decision is quite distressing.

It further erodes the legacy of President George W. Bush who appointed Roberts to the Supreme Court and continues the awful trend of conservatives Justices who succumb to the pressure and the liberal atmosphere in Washington D.C. and become members of the liberal wing of the court. In contrast, liberal Justices never move to the right, they just become more liberal.

At least the four dissenting Supreme Court Justices were able to see the issue clearly. In their joint statement, the dissenting Justices said that the healthcare law "exceeds federal power both in mandating the purchase of health insurance and in denying non-consenting states all Medicaid funding." In his summary comments, Justice Anthony Kennedy noted that "In our view, the act before us is invalid in its entirety.”

Despite the ruling, which was only made possible by the absurd decision of Chief Justice Roberts to join the Court’s liberal wing, the act remains invalid, impractical, and unaffordable. Although the Court ruled that it is constitutional, the bill is possibly the worst piece of legislation ever passed by Congress.

Unless it is eventually repealed, Americans will be paying a very high price for the Chief Justice’s newfound liberalism.

DRS. OBAMA AND JOHN ROBERTS SERVED U.S. AN OBAMACARE PIG IN THE POKE