Louisiana Republicans Have Political Opposition: Themselves 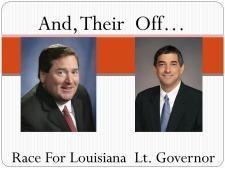 Now that the Democratic Party has forfeited the statewide elections, Republicans have only themselves to oppose, if that, for only two or three races will be competitive.

All that's left to count in the governor's election is the protest vote against Bobby Jindal. Even his severe critics will have to cast about to back one of the nine relative unknowns in the field, and many just won't vote.

This election figures to be historic for the wrong reasons, starting with what could be the lowest percentage turnout of registered voters in the last century or two. Since the constitution began again allowing governors to run for re-election five decades ago, never has one gone unchallenged by at least one elected official, until now.

That leaves Gov. Jindal with nothing to run against but expectations, which can be tricky. Even with minimal opposition, he will be hard-pressed to match the record re-election margin of John McKeithen, the last great governor, who polled 80.6 percent in 1967 against Congressman John Rarick, a fiery "states' rights" ultra-conservative who makes today's Tea Party look pink.

More within Jindal's reach are the winning percentages of the two other re-elected governors since then. Edwin Edwards won his second term in 1975 with 62 percent against state Sen. Bob Jones, Secretary of State Wade Martin and three others. Mike Foster matched that in 1999 against Congressman Bill Jefferson and nine others. Can Jindal top that mark, running against only "others?"

For an actual contest, one has to move down to the lieutenant governor's race, which, in tone, already is headed in that direction. Ignoring Ronald Reagan's 11th Commandment, Lt. Gov. Jay Dardenne and Plaquemines Parish President Billy Nungesser, both Republicans, already have made unkind remarks about the other, and they have barely dug into their opposition research.

Both candidates got discouraging news when the governor took the air out of their election with one word, "Yes," when asked at qualifying if he would complete his second term. Thus, the next lieutenant governor must do the same, with remote prospects of succession.

This election cycle will prove that Louisiana is still a two-party state. There's the Republican Party and the Tea Party, which includes many of the more conservative Republicans who have been trying to get rid of Dardenne, without success, through two previous statewide elections. Adding muscle to the cause this time is Sen. David Vitter, pre-cursor of the Tea Party, who is backing Nungesser.

There is, of course, another party, and the Democrats, without a candidate, are going to decide the lieutenant governor's election by choosing the least objectionable Republican to them.

The same goes for the race between Attorney General Buddy Caldwell, the former Democrat turned Republican, and former Republican Congressman Joseph Cao, who often voted with the Democrats.

The secretary of state's race pits two Republicans who are friends, which won't stop them from trashing each other. Leaving aside issues dealing with the office--none come to mind--this race will test who did worse: Speaker of the House Jim Tucker for pushing the abortive legislative pay raise of 2008, or Secretary of State Tom Schedler for receiving homestead exemptions on two properties for three years.

Both have prepared their defenses. The debate should be uplifting.

Alone among the bunch to go completely unopposed, Treasurer John Kennedy has ignored the maxim of career statewide officeholders: Stay low, stay long. None of them have struck a higher profile than Kennedy, who has lectured two governors on over-spending, and none have stayed longer than him, thrice re-elected without opposition.

This is bound to be Kennedy's last term as the state's check writer, for his sights have long been higher. Without having to tap into his $1.9 million warchest, he has a big financial head start on whoever else wants to run for governor in 2015.

A couple of little-known Democrats did find their way onto the ballot to oppose Insurance Commissioner Jim Donelon and Agriculture Commissioner Mike Strain. It's not so bad for them, for they won't waste their already-prepared TV spots, extolling their virtues and accomplishments, which, without opposition, who would ever know?