Ahmadinejad, Tyrants And Terrorists To Make It In New York, New York 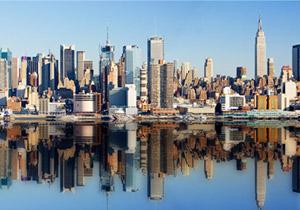 Next week, world leaders will be gathering in New York City for the United Nations General Assembly. As usual, the spotlight will be on some of the world’s biggest tyrants who will be given the key speaking positions.

Iranian dictator Mahmoud Ahmadinejad will be bringing his contingent of 140 Islamic radicals to the Big Apple. Once again, Ahmadinejad will speak to the U.N. General Assembly and receive a warm reception from the vast majority of 193 delegates. In contrast, the leader of Israel, the only democracy in the Middle East, always receives a rude reception. Certainly, anti-Semitism is a key factor in this rough treatment, but it is also worthwhile to note that about two-thirds of the U.N. delegates represent developing countries where democracy is a foreign concept. Sadly, tyrants, despots, radical clerics, and dictators are well represented among the U.N. General Assembly.

In previous years, dictators like Fidel Castro of Cuba and Muammar Gaddafi of Libya have been given starring roles at the United Nations. In a 2009 U.N. speech, Gaddafi far exceeded his allotment of 15 minutes and rambled on for close to two hours about so-called enemies of his country. In fact, Libya’s biggest enemy has always been Gaddafi, who has finally been removed from power. He is currently wanted by the International Criminal Court for crimes against humanity. The world would have been spared much death and destruction if the minute Gaddafi set foot in New York he would have been arrested for his role in the bombing of Pan American flight 103 and the killing of 270 innocent people.  Instead, Gaddafi was given a hero’s welcome at the U.N. and treated like some sort of Islamic rock star.

In 2009, a true tragedy occurred when Gaddafi was allowed to come to this country and spew his poison. Next week, U.S. officials should not make the same mistake again.  Ahmadinejad should be arrested and immediately delivered to the International Criminal Court for his long list of crimes.

Ahmadinejad has been advancing an illegal nuclear weapons program and lying to the world about his intentions. He has been lavishing funding worldwide Islamic terrorism and supporting the main enemy of the United States, Al-Qaeda. In fact, according to Nathan Carlton, of United Against a Nuclear Iran, Ahmadinejad’s regime is “the world largest state sponsor of terrorism.” There is clear evidence that Ahmadinejad is arming insurgents in Iraq and Afghanistan with the latest weaponry, which is used to kill American soldiers.

Along with supporting international jihad which specializes in killing innocent civilians, Ahmadinejad brutally repressed a peaceful democratic uprising in his country in 2009. This brutality has not stopped and according to Amnesty International, the Iranian regime has executed an average of two people per day in the first half of 2011.

Ahmadinejad has blood on his hands, which is why no organization that purportedly pursues peaceful coexistence among nations should allow this tyrant a platform to emit his hatred toward the U.S. and Israel, or his anti-Semitic beliefs denying the existence of the Holocaust.

As we await another disgusting display at the United Nations, U.S. taxpayers should demand that Congress withdraw funding from this organization. Currently, The U.N. receives 22 percent of its regular budget and 27 percent of its peacekeeping operations from the United States taxpayers.  No other country contributes as much as the United States and some countries contribute as little as 0.001 percent of the budget. In addition, our country incurs significant costs in hosting the U.N. headquarters in New York City.

Facing a massive $1.4 trillion annual deficit and an ever increasing national debt of $15 trillion, the United States can no longer afford to waste money on an organization that promotes anti-Semitic, anti-American dictators.

Jeff Crouere is a native of New Orleans, LA and he is the host of a Louisiana based program, “Ringside Politics,” which airs at 7:30 p.m. Fri. and 10:00 p.m. Sun. on WLAE-TV 32, a PBS station, and 7 till 11 a.m.weekdays on WGSO 990 AM in New Orleans and the Northshore. For more information, visit his web site at www.ringsidepolitics.com. E-mail him at [email protected]ngsidepolitics.com.