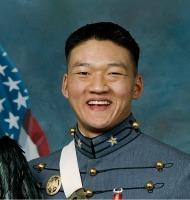 in an often humorous, moving and dramatic speech lt. dan choi made his first public address since the repeal of don't ask don't tell" went into effect, at the forum for equality acclaim awards ceremony honoring human and lgbt rights, in new orleans september 24.

lt. choi, a west point graduate and iraq war veteran, was notified that the army had begun discharge proceeding against him for announcing that he was gay on the rachel maddow show.
he attended the signing of the bill that repealed "don't ask don't tell" restoring the honor of service to countless veterans unjustly punished for their integrity.

the event sponsors, the forum for equality is a human rights organization dedicated to the establishment of a society free from discrimination and to the support of good government. the forum has been the most visible organization in louisiana, helping to pass laws and promote every civil rights advancement for lgbt citizens, and i am proud to serve on its board.

lt. choi's speech is presented to here in two parts.

Segment 2 video of Nungesser vs. Dardennedebate

Join Bayoubuzz'sLouisianaPolitics and Government community is a socialmedia site that is designed to help connect people, government and politics in Louisiana.
Tweet
Tweet
Published in Latest Buzz