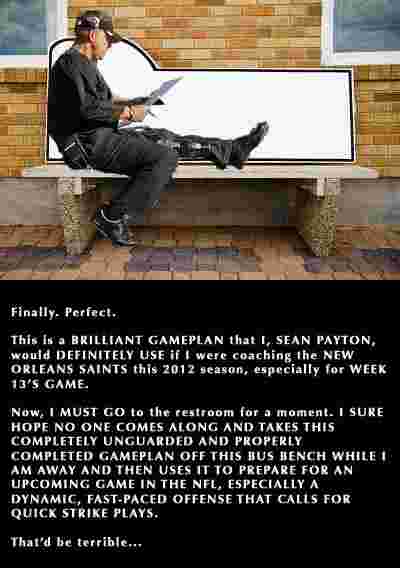 It is with equal amounts of joy and sorrow that we comment on two significant events that occurred in Who Dat Nation on Friday.

Sean Payton's contract odyssey, which was never more than a trip to the local bank, was resolved when news leaked that the head coach and the New Orleans Saints agreed in principle to a new contract. Then we learned with equal amounts of regret the passing of one of the organization's icons, at least to those on the inside, long-time strength and conditioning coach Russ Paternostro. Now, for the rest of the story ...

It seemed for a long time that your intrepid scribe was the only person who wasn’t concerned about Sean Payton's contract status. Maybe because nobody else out there knew NFL rules. My contention all along was that when Payton's new contract with the New Orleans Saints was rejected by the NFL office, his old contract still contained a 2012 season. That is significant because Payton's suspension prevented him from fulfilling the 2012 contract in which case it was "tolled," or pushed forward to the following season.

Tolling a contract is longstanding league policy, usually when a player loses a season from a non-football injury, but whenever an individual under contract can not serve out the terms of that contract. That applied to Payton when he was suspended for the 2012 season, which meant that his contract was pushed to the 2013 season. That fact was confirmed to me by a trusted source, which means Payton's only flirtation with Cowboys owner Jerry Jones was in the mind of the Chicken Littles who are convinced the sky will fall sooner or later.

That comedy was tempered by news of Paternostro's death from respiratory complications at age 74. Rarely seen without a smile on his face, Paternostro was an   ambassador for his native Westwego on New Orleans' West Bank, and was as thoroughly New Orleans as red beans and rice or carnival throws. Known to hundreds of Saints players and coaches as "Stretch," which came from his first command as he led pre-game warm-ups, Paternostro joined the Saints in 1981 three weeks before owner John Mecom hired Bum Phillips, and he left with Jim Mora in 1996.

To me, Russ exemplified the broad richness of a sports organization, because he was one of the mainstays whom the fans don't hear much about but without whom none of it would work. The Saints had their share of such people in place when I came with Jim Finks and Jim Mora in 1986 and who were still there when Mora and I left in 1996. Russ, Miss Ellen, For Chrissakes Fran, Chief, Silky, Sawbones and others all were welcoming and wonderful people who reduced the daily pressure of a high-profile business to a smile or a joke. I can still hear somebody cracking a joke at Russ's expense and him responding: "That's what I'm talkin' about!"

More in this category: « CNN's Piers Morgan gunned guest Larry Pratt, should be deported Sporting a 2013 Louisiana, New Orleans and Saints, LSU forecast »
back to top