It’s every Broadway fanatic’s wildest fantasy come true. A live, full-scale song-and-dance production right there in his own living room, complete with an armchair narrated tour of the plot from beginning to typical, old-time Broadway musical happy ending.

The oddly titled The Drowsy Chaperone is the vehicle by which the unnamed “Man in the Chair,” portrayed by local favorite Ricky Graham, gets to live out his fantasy and find – at least temporarily – a cure for his “non-specific illness.” The JPAS season-opening production debuted on September 30 onstage at the Westwego Performing Arts Center (177 Sala Avenue, Westwego) and will run for two more weekends through Sunday, October 16.

Clad in drab clothing, bored and basically unmotivated, the Man in the Chair sits back in his favorite chair, cycles a two-record LP set of his favorite musical on his old-fashioned turntable and the action unfolds before his eyes.

And before his eyes the story plays itself out. The year is 1928. The place is Broadway’s Morosco Theatre. Real-life husband and wife team Marc Fouchi and Kelly Fouchi take center stage as young, handsome, wealthy oil heir Robert Martin and drop-dead gorgeous, top-name Broadway showgirl, Janet van de Graaf. They are in love. Although they just met and barely know each other, Janet is only too willing to give up her stellar career with the Feld
zeig Follies to marry Robert and enjoy a life of pampered luxury.

This, of course, doesn’t sit well with the show’s temperamental impresario, Mr. Feldzeig (David W. Hoover) who, if you haven’t already guessed by now, is a thinly disguised caricature of Florenz Ziegfeld. And not only does it not sit well with him, it sits even less well with an unnamed gangster boss who is backing the show and whose two henchmen, posing as pastry chefs for the wedding (Matthew Mickal and Mattias Grau III), are holding Feldzeig’s feet to the fire. They are counting on him to break up the wedding and keep Janet hoofing and strutting on the Great White Way. Or else!

That’s the basic plot. Numerous subplots intervene in the meantime as the humorous drama and suspense plays itself out. Mrs. Tottendale (local theatre veteran Janet Shea) and her obsequious butler, Underling (Roland “Butch” Caire Jr.) are hosts for the planned nuptials while Robert’s best friend, George (Brian Falgoust) is a nervous wreck trying to pull all the wedding details together. One of George’s tasks is maintaining the old-fashioned tradition of keeping the bride and groom from seeing each other until the actual wedding. That’s where the title character comes in.

The unnamed “Drowsy Chaperone” (Carrie Hill) is the lovable lush who is charged with keeping Robert and Janet apart until the magic moment. However, she is more self-absorbed in her alcohol-sotted parallel universe than she is with matters of the heart. Of all the words in the English language dictionary, probably none have more synonyms than “intoxicated.” Roughly 212 at last count. Surely the creators of this wonderful comedy could have come up with a better moniker than “drowsy” in the title. Hill is anything but that, stumbling and bumbling across the stage in lively lockstep with the music on her big production number, “As We Stumble Along.”

Shadowing Feldzeig, eagerly and impatiently waiting in the wings to step into Janet’s soon-to-be-vacated lead role in the Follies is the leggy, ditzy, curly-haired blonde chorus girl Kitty (Carrie Black). She’s none too bright; all squeals and gushes but, with gams like hers and the talent to maneuver them, who needs brains? But, no matter how doggedly she pesters him, she still can’t get her big break with Feldzeig because his life depends on keeping Janet single and in the show. And so, to accomplish this, he contracts with the notorious gigolo, Adolpho (Brian Peterson) to have Janet sexually seduced and make knowledge of the seduction public.

Adolpho, a totally silly-looking dandy in a tight, bright toreador outfit and a conspicuous white streak through his jet-black hair, shows up in Janet’s boudoir, ready for the kill, but who does he meet there instead? The all-too-willing-to-be-seduced title character. Needless to say, the seduction goes awry for the intended target and unintended consequences result instead. Still more complications arise as the wedding plans themselves go awry, but along comes Trix the Aviatrix (Erica Fox) to save the day. Not to spoil it for those who haven’t yet seen the show, all I will venture to say at this point is the ending is a happy one for more cast members than just the center-stage couple. 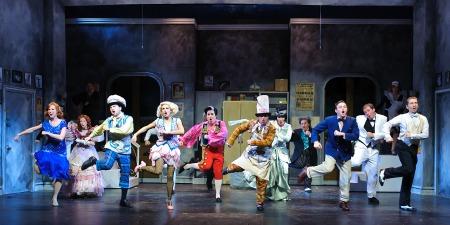 Especially noteworthy (and hysterical) is the “Monkey on a Pedestal” production number; so hokey and corny you just have to laugh along with it. Which was probably its intent. Yet another hilariously memorable moment came when the performers were doing a number that kept repeating until the Man in the Chair stamped his foot on the floor in front of the stereo to get the record going again (“Works every time”).

Co-producer/Director Gary Rucker can look in the mirror and nod and smile with satisfaction at yet another in a long string of fine, first-rate stage productions. Everything about this show worked to near-perfection. It was funny, serious and funny again. It was well-acted and well-choreographed, thanks in no small part to Kelly Fouchi who coordinated the dance numbers while doubling in the leading lady role. The show’s pacing was exquisite. The dance numbers were performed flawlessly. The jokes were delivered to maximum effect, many of which would have had the audience rolling on the floor had there been room to roll. A better cast of local actors could hardly have been chosen. Everyone played their roles to the hilt including the Ensemble supporting cast, Hope Barnard, Bob Murrell, Abbey Peterson and Jeffrey Springmann.

Overall a fun show, definitely worth seeing. A great getaway from our otherwise humdrum and ordinary lives. Good seats are still available by calling 885-2000 or going to the JPAS website. www.jpas.org.

NEXT UP FOR JPAS: The Hallelujah Girls, starring Gennifer Flowers, October 21-November 6, and Fiddler on the Roof, October 22-30. More details in next week’s column

Contact Dean Shapiro and Bayoubuzz.com should you want this publication to cover your event.