In a number of communities now, there are debates as to who should "occupy" the direction of American politics—the right or the left.

Here are two opposing viewpoints from within the Bayoubuzz community, columnists for Jeff Crouere and Sidney Arroyo on the “Occupy Wall Street” issue raging through America.

During this period of angry Louisiana politics, two of the top government officials in the state appear to have a good working relationship--Governor Bobby Jindal and New Orleans Mitch Landrieu.

There obvious close camaraderie stands in stark contrast to that of former Governor Kathleen Babineaux Blanco and D. Ray Nagin, both who became somewhat tragic figures in the Katrina chaos. During that fractious time, the blame game between the governor and the mayor was a side show on the local and national stages. 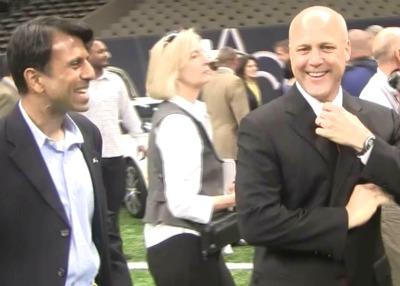 Here is a picture I took of Jindal and Landrieu approaching the main stage after photo shoot. On numerous times, whenever I have seen Jindal and Landrieu together, together appear to be joking with one another or sharing bits of humor--as well as speaking highly of one another.  Jindal, a Republican and Landrieu, a Democrat, certainly have their political disagreements and ambitions.  But, at least, when it comes to public events, the two absolutely appear to enjoy one another’s company.

Both men are young and could very well be on the local or national stage for many years to come.

Who knows, “It could be the start of a beautiful friendship!”

(Watch video of the event)

The poll shows that the race for Louisiana Lt. Governor between Jay Dardenne and Billy Nungesser is very close.  Either man could win.

No.  I am not talking about the recent automatically-generated telephone poll that showed the two at a dead heat.  Some politicals discount that poll because it is not performed by “live” people asking questions but by computers.  Dardenne discounts it all together and says it is not even close to his internal polls which show he is ahead of his challenger.

Actually, I am referring to our Bayoubuzz.com poll.  As of 12:40 pm today, 1378 votes have been cast.  Who’s winning? Nungesser is edging out Dardenne  620-555  with the rest undecided or not caring for either choice.

Take the poll that appears on this page and pass it on to your friends and associate.

We will be reporting on this poll throughout the rest of the campaign season.  In the age of technology, with electronic polls being employed using robocalls or taken over  Internet ( like ours) which arguably are even less scientific,  it is still fascinating to see how close the results compare to final results election night.

The race for the Presidential Primary and caucus campaign dates is as “hot” as who might be the Republican nominee.  Today, Iowa has just leap-frogged  to January 3 for its famed caucus.  Who knows where this might take us?

With this race to the political top, presidential politics will be competing with the holiday football games for television coverage.  We’ll see who wins.

The early start for the presidential primaries puts some states such as Louisiana’s GOP into a trick-bag.   The ultimate question is--what will they need to do to remain relevant as the primary and caucus season begins to bleed into 2011.


by Stephen sabludowsky, Publisher of Bayoubuzz.com