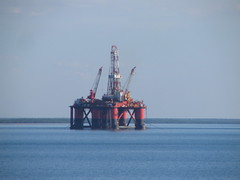 BATON ROUGE, Louisiana – Today, Governor Bobby Jindal joined Lt. Governor Scott Angelle to represent the State of Louisiana at the hearing on the drilling moratorium at the U.S. 5th Circuit Court of Appeals in New Orleans. The Court issued a ruling shortly after the hearing where they denied the motion for stay.  Below is a statement from the Governor.

Governor Jindal said, “We’re pleased the court did not reinstate the moratorium. However, it’s clear from the ruling that this matter is not resolved and there remains uncertainty about the future of deepwater drilling and thousands of

jobs in our state.

“It was clear again from today’s court arguments that the Secretary of the Interior ignored the advice of his own experts. The Secretary’s six-month moratorium was not related to the facts provided by his own hand-selected experts. Indeed, the Judge in the original case said the Department of Interior’s report to shut down deepwater drilling was inaccurate and misleading. He said the Department’s statement that their report’s recommendations were ‘peer-reviewed by seven experts identified by the National Academy of Engineering’ was misleading and that five of the National Academy experts and three of the other experts have publicly stated that they do not agree with the six month blanket moratorium.’

“The arguments at today’s hearing continue to show that the Administration’s six-month blanket moratorium was both arbitrary and capricious. The reality is that we absolutely want drilling to be done safely and do not want another spill or one more drop of oil on our coast or in our water, but thousands of Louisianians should not have to lose their jobs because the federal government can’t adequately do its job of ensuring drilling is done safely. The hearing today showed again that there is no clear pathway from the federal government about how to increase the safety of drilling.

“The federal government has an entire agency dedicated to monitoring safe drilling. It shouldn’t take them six-months or longer for a new national commission to ensure safety measures are in place and their laws and regulations are being followed. Instead of an arbitrary moratorium, the Department of Interior should have listened to their experts and enacted the specific recommended steps from their own experts to ensure proper oversight and safe drilling.

“Unfortunately, there are serious job losses that will result from the six-month deepwater drilling moratorium which is estimated to kill 20,000 Louisiana jobs and cost us between $65 to 135 million in lost Louisiana wages each month. The reality is that the moratorium not only threatens jobs on oil rigs, but it also jeopardizes many other industries that supply our oil and gas industry and the entire communities that depend on them.”