today marks the one month anniversary of the occupy wall street movement, and the astounding rise of this now-international phenomenon has drawn hundreds of thousands of active participants at hundreds of sites in the U.S., across the globe and across all borders. by comparison the tea party now borders on irrelevance.

the facts are obvious, the writing’s on the wall and the two entities’ future courses seem inescapable.

recent polls by right, left and independent pollsters acknowledge that occupy wall street has grown significantly more popular than president obama, all the gop nominees for president, both houses of congress, the mainstream media…and the tea party.

once the darlings of the mainstream media and a bludgeoning force of the neocon evangelical right, the tea party is now pretty much reduced to the role of the embarrassing uncle one encounters at uncomfortable family reunions.

how have they been reduced to such a state? has it been the age-old story of the bright candle burning til it extinguishes itself? has it fallen under the attacks of those “leftist-socialist-marxist-communist-gay-lovers” that teabaggers brand everyone who dares disagree with them? was it because of the damned “liberal” media? you know, the “liberal” media that sponsored their political debates and demonstrations like cnn and fox and the talk-radio networks pushing toothpaste and beer?

and how to account for the remarkable and unforeseeable global expansion of the occupy wall street movement?

while i’d like to think that the learned political/ social writings of people like myself had something to do with these seismic changes, i think we all know who are really doing in the tea party. the answer is clear: they have no one to blame but themselves.

the teabaggers have a problem with vision and fail to see what’s gone so fantastically wrong. they’re pretty much in the same position as marx…groucho marx, that is…when he said, “the facts are so clear a four-year-old can see them, so someone go out and find me a four-year-old because i can’t make heads or tails of this.”

once the holy grail of republican presidential candidates, the tea party’s tacit endorsement (after all, the tea party doesn’t really endorse anyone and isn’t really a political party wing or anything like that, wink wink!)…as i was saying, the tea party’s support is now registering as the kiss of death for whomever their flavor of the month candidate becomes.

first it was michelle “pray the gay away” bachmann. then it was rick “i’ll execute anyone as long as they’re not a corporate ceo” perry. and now it’s herman “if you’re out of a job it’s your own damn fault” cain that they’re trying to push as their new hero. but aside from the fact that he got his “economic plan” from the virtual reality game sim city and it’s now coming out that he is totally propped up as the paid-for meatpuppet candidate for the koch brothers, his petals are beginning to wilt.

the tea party is failing now because, while they have tried to pretend that they were the place for all governmental discontent to rally, they have in fact deliberately excluded and rejected many groups of people in search of a voice and alternative to the major parties. in so doing they’ve shown flashes of their ugly, secret face.

and in so doing, they helped give birth to occupy wall street.

the philosophical intolerance of the teabag base group has been their undoing and the undoing of their presidential aspirants, even moreso than the political stupidities that have come from the mouths of their anointed champions.

with the growth of the influence and appeal of the occupy wall street movement, some conservative pundits have actually written columns about what the two groups have in common, and that there might be common ground where both factions could unite. i think these voices of appeasement are a sign of the growing weakness of the tea party and the realization that the pendulum has swung away from them. i also think the idea is without merit. there is far more that separates the two movements than unites them.

consider these handful of utterances and issues that occupy wall streeters would find unacceptable:

“let him die,” in response to a presidential debate question about health care answered by the audience rather than the candidates, not to mention the stunning silence of the candidates in failing to scold the audience for such pathetic behavior;

at another debate, booing and maligning a member of the united states military on duty in iraq…not for what he thought, but for daring to ask a question about the end of the misbegotten military policy of “don’t ask don’t tell”;

their cheering of bachmann when she derides anti-bullying legislation as frivolous and her husband and herself profiting from their “pray the gay away” business;

undisputed tea party darling and wisconsin governor scott walker, tool of the koch brothers and noted union buster, who has forced public workers to pay more for their pensions, gave his word that he’d do the same and in full, lied about it and has been getting taxpayer-funded pension payments since he took office, and hid the fact until the associated press busted him just days ago.

on fiscal issues, there’s no way occupy wall street would accept the blindingly idiotic teabag defense of the top 1% of americans who control 40% of the nation’s wealth. one of the core principles of the occupy movement is getting those who’ve profited unfairly to help shoulder the responsibility of taxes more fairly. as the iconic message of the occupy wall street movement states: “we are the 99%”, and they will not compromise when it comes to more equitable taxation of the wealthy and corporations and crooked ceo’s, or the removal of the corrupting influence of corporate wealth on the political process. duh.

nah, i don’t see any merger happening any time soon. and i consider that a good thing, because the teabaggers are going down, and hard. yes, they will have an impact on the gop nomination, and in so doing they’ll be insuring the likely re-election of their nemesis, the hated barak hussein obama.

as for occupy wall street, the more they’re attacked…in the press by the corporate media, on the streets by overzealous cops, from the mouths of jealous teabaggers….the bigger they grow. it’s quite the phenomenon. whatever hasn’t killed them has only made them stronger.

last Saturday thousands upon thousands marched in and around times square in new york city alone, ground zero of the movement.

as for me, i ended up at the occupy new orleans march that was conceived as part of the Saturday global “day of action” that saw marches, demonstrations, arrests of citibank customers who wanted to withdraw their own money, police and anarchist fringe violence and more in locations around the world.

i wasn’t planning to attend, but they were so accommodating that when my beautiful wife and i walked out of our favorite royal street coffee shop, there they were, right in front of us…hundreds of them!

with police escort and festive spirit, they marched in and around the quarter, swelling their number with add-ons like us, and receiving a predictable mix of cheers and strange looks from tourists and locals alike. no hostility, just smiles and frowns. i smiled. i joined in. i like participatory democracy!

and again, the corporate media downplayed the numbers, muddied the message and tried to minimize the respectability and makeup of the participants.

and again, i took pictures so you can see for yourselves at the bottom of this column. hundreds of people, all walks of life, not scroungy young people as they’d like you to believe. there were young  people, but also present were families with kids, professionals, former soldiers, students, waiters, retailers, business workers, retirees, even a former commodities trader.

by the way, as i write this there is now word of new occupy wall street chapters opening in shreveport and baton rouge.

i don’t delude myself into thinking that louisiana will be anything but a predominantly teabag enclave for at least a while longer. but, as is so often the case in louisiana, we’re always a couple of years behind the curve on such things. we love holding on to our past here in just about everything in life, and even our misplaced beliefs take a bit longer to lose their grip.

but eventually, just as we’re being left behind we eventually catch up to the rest of the world, and those who never let go will have to live with their faded, flawed memories and what’s left. 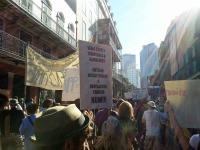 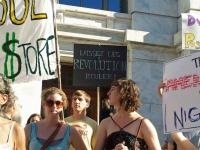 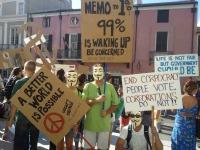