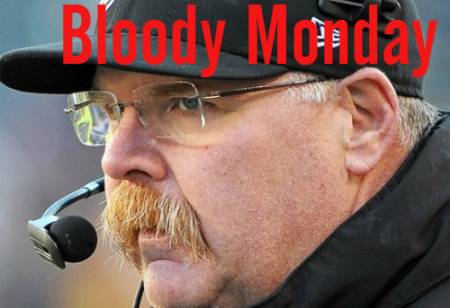 The day after the season is normally a day of trepidation around the NFL, since most clubs coming off disappointing seasons pull the triggers on their coaches and front office people as soon as the final whistle blows. It did not soften the blows coming on a holiday, and this year does seem bloodier than most.

Seven coaches were fired, by Arizona, Buffalo, Chicago, Cleveland, Kansas City, Philadelphia and San Diego, while five general managers bit the dust, in Arizona, Cleveland, Kansas City, New York Jets and San Diego. The NFL has operated for years on the old bromide that coaches are a dime a dozen, but a good GM is hard to find. That may be given a different twist this year if more NFL clubs take a hint from baseball in identifying their new leaders. But more on that in a minute.

The longer I am out of the league, and this will be Year 11, the fewer friends I have left. Three more general managers with whom I had close ties were fired Monday. Mike Tannenbaum, who was dismissed by the Jets, was a young law student at Tulane when he knocked on our door at Saints Drive in 1995 asking if he could work for free. Chet Franklin, our personnel director, took Mike under his wing on teaching the nuances of scouting while I tutored him on the salary cap. He was a quick learner and after about six months of gratis performance, we found a little money in the budget. Mike then interned under Ernie Accorsi and Bill Belichick with the Browns before heading to the Jets as contracts negotiator and salary cap manager for Bill Parcells in 1997. He's a bright guy, still young, and the Belichick-Parcells connection will keep him in the league.

A.J. Smith, fired by San Diego, was pro personnel director when I was in Buffalo in 1997-98. He followed former Bills GM John Butler to San Diego and then took over when Butler died of lung cancer. Rod Graves, fired by Arizona, was at the Bears for many years just before I went to Chicago in 1999-2002. Both are good football guys and good people who are at the stage of life where they should be thinking about going fishing.

Finding their replacements will bear watching, especially if the NFL takes a hint from baseball. Traditional NFL general managers either started as personnel guys like Smith and Graves or as financial guys like Tannenbaum and Mickey Loomis. But baseball proved the popularity of the Moneyball type of GM with Billy Beane of the Oakland Athletics and his acolytes. That has become the way in baseball with young GM's like Theo Epstein who create teams based on computer models and obscure statistics.

Sports Illustrated and the Wall Street Journal illuminated such a trend in December when they suggested the NFL might be leaning toward the same path. The stories cited Gideon Yu, president of the 49ers, who is a former executive at Facebook, YouTube and Yahoo. Yu has brought to the 49ers a team of young techsters who are working on everything from streamlining the draft scouting process to finding out how fans in different parts of the stadium can organize chants with their smartphones. As Yu told the WSJ, his people are "fundamentally trying to rethink everything about live sports."     In a story headlined "Blessed are the geeks," SI wrote about Jacksonville's new analytics guru, Tony Khan, who is tasked with finding a mathematical solution to a 2-14 team.

These are people who are rethinking the conventional wisdom of such things as when do you go for it on fourth down or what positions should you avoid drafting and load up in free agency? Whether other NFL teams will buy into this trend is anybody's guess, but at least after Bloody Monday, they have that chance.