Louisiana elections: Landrieu vs. Cassidy--who falls over the fiscal cliff? 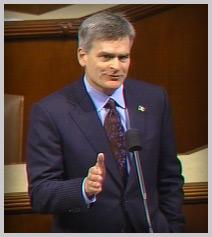 So, Sen. Mary Landrieu voted for the fiscal cliff deal in the Senate. Her likely Republican opponent, Baton Rouge Congressman Bill Cassidy, did not.

Northeast Louisiana Rep. Rodney Alexander, a Republican, and New Orleans-Baton Rouge Rep.Cedric Richmond, a Democrat, were the only Louisiana members to support the bipartisan deal in the House.

But it’s the votes of Landrieu and Cassidy that are the most interesting because the fiscal cliff could be an issue in the 2014 Senate race and influence Landrieu’s re-election bid.

In one sense, the votes don’t change the equation at all.  Landrieu is a Democrat and was expected to support the deal. Even her Republican Louisiana counterpart, David Vitter, voted for the plan that raised income taxes on people earning more than $400,000.

Bill Cassidy, who once had a reputation around Baton Rouge as a fairly moderate Democrat, has firmly repositioned himself as a conservative Republican and, so, it’s no surprise that he opposed the deal.

Still, it’s likely that Cassidy will attack Landrieu for the vote. In Wednesday’s Baton Rouge Advocate, Cassidy said the bill did not address deficit and did nothing about entitlement spending. “We’ve done nothing for the other issues,” Cassidy said.

For her part, Landrieu told the newspaper,

While this compromise did not do as much as we had hoped to reduce the deficit, I remain committed to working with my colleagues on both sides of the aisle to find a balanced approach to deficit reduction that includes both spending cuts and new revenues. In addition, we worked hard to extend the estate tax in a reasonable way that protects small businesses and farmers.

It’s not hard to imagine a debate between Landrieu and Cassidy in about 18 months in which Cassidy, his tax purity still intact, attacks his opponent for supporting a bill that raises billions in new taxes while doing little to nothing to address entitlement spending.

Landrieu, of course, can respond by noting that Cassidy defended millionaires against tax hikes while simultaneously opposing extended benefits for unemployed Americans.

And, of course, had Cassidy’s position prevailed, every taxpayer would have suffered a significant tax increase, not just the top 2 percent.

But, as they say, in politics, when you’re explaining, you’re losing.

So, let’s do a little crowdsourcing exercise for Landrieu and Cassidy.

What do you think is the most effective attack Cassidy could throw against Landrieu for her vote? And how might Landrieu respond, or might she use Cassidy’s vote against him, particularly with lower- and middle-income Louisianians?

Cassidy is likely to wage his battle against Landrieu mostly over Obamacare, but taxes will surely be an issue. And who knows what fodder the upcoming debt ceiling vote might also provide?

So, share your political wisdom in the comments section below — and let the 2014 Louisiana Senate race begin.

Join in the fun by commenting on this issue at Bob Mann's blog, "Something Like The Truth" and read the original column