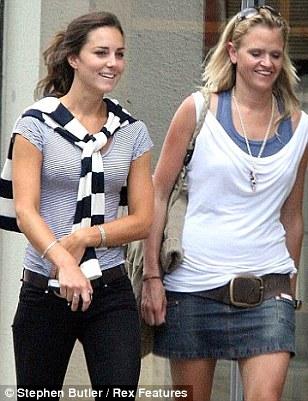 Are you going to the supermarket to reprovision your cubbards after a merry Christmas and a Happy New Year?

If so, be sure to consult the grocery oracle, “The Globe,” that is always in place near the checkout line.

This coming week, previewing gossip blogs promise us, The Globe will feature an article on how Kate Middleton and her husband, Prince William, “walked out” on the Queen’s Sandringham holiday celebrations following yet another alleged dust up with Prince Charles’s wife, Camilla, over who will be the next monarch.

Gossip blogs like Celeb Dirty Laundry claim, “So what did Camilla do?  Well we can’t be certain until we read this week’s GLOBE print edition but we are pretty certain that it involves Camilla ridiculing Kate for having her royal boobs and other private parts displayed all over the internet and on magazine stands worldwide.”

Celeb further asserts: “The one blemish on Kate’s otherwise impeccable record as a royal wife is her topless and bottomless photo scandal.”  But now, allegedly emboldened by carrying the newest Royal heir, “pregnant Kate is not the shy lass she was a year ago.  Fueled with all those powerful pregnancy hormones and supported by her gallant husband Kate refused to tolerate Camilla’s nastiness and out of the castle she flounced! Queen Elizabeth must have been mortified at the dispersion of her closest family – and what could Kate’s parents have thought?  I bet Charles wishes he never met the wrinkly old rhino!”

And by “wrinkly old rhino,” it is likely that Celeb is referring to Camilla, and not to Queen Elizabeth.

But was Kate Middleton ever a “shy lass?”

The assertion she was is a remarkable piece of panicked public relations.

Why the panic now?  Could the suitability of Prince William for the royal succession be a current concern of the Queen?

It is much-reported, for years prior to her “royal wedding,” that Kate Middleton was not so “shy” that she did not traipse down the fashion runway at a university fashion show attended by the man she calls “Big Willie” wearing nothing but her knickers and a transparent, leave-nothing- to the-imagination negligee.  Another photographed college outing showed Kate wearing little more than a white diaper and nipple-covering foam resembling whipped cream.

Innumerable pictures, very pre-royal-wedding, showed Kate flashing her reproductive gateways as her miniskirts hiked up and up as she both entered and exited royal vehicles.  At a memorial fund-raiser for a dead university class mate, Kate was photographed lying outstretched on the floor, her hot pants hiked up to her crotch, with her legs splayed apart as the deceased’s surviving brother tried in vain to get her to stand up, or at least close her legs.  To alleviate the inevitable boredom of one interminable religious charity meeting, Kate was clearly photographed carrying an opened bottle of booze and filled wineglass in hand as she entered the sanctuary.  Photos of Kate in the teeniest bikinis, covering but not hiding nipples (taken while vacationing with Prince William in the ten years prior to their marriage), have been blocked online post-marriage but can still be found on determined websites that continue to raise questions about Kate’s fitness for royal life.

And, most significantly, Kate’s good friend and mentor for her charitable and athletic activities prior to her wedding was “outed” as Emma Sayle, a busty British blond who plans....well, how to say this?

Honestly.  You can’t make this stuff up!  Just google “Killing Kittens” or click on the above link and watch the video below, if you don’t believe me.

Did Kate ever attend any of her good friend and mentor Emma’s “elite sex parties?”

Try to imagine, for a moment, the trouble that a “yes” or even a “maybe” answer to these questions will cause.

There is much circumstantial evidence to support the claims more and more British subjects are making that Kate Midleton aggressively seduced Prince William, who was vulnerable and psychologically damaged because of his parents’ troubled marriage and his mother’s premature death.  Princess Diana’s death was the subject of no fewer than three “official” coroners’ and judicial inquests, and in the last of these, claims were made that she had been intentionally murdered by Prince William’s own family members.

Such facts must be very hard for both Prince William and his brother, Prince Harry, to take.  The Middletons’ involvement in “helping” Prince William during his young adulthood, and in apparently substituting for the Royal Family, is being much debated in the United Kingdom.

Many British people, while relieved that the last inquest is over (regardless of its verdict), are starting to feel some anxiety about a future royal family in which the Middletons, and especially Kate, will play a role of any kind.  And some suspect that the Middletons used sex, and their nubile daughter, in order to orchestrate a “royal romance” that eventually entrapped their future king.

A much-vaunted pre-wedding photograph of Kate showing off her well-toned biceps as captain of an all-woman’s rowing group called “The Sisterhood,” shows her standing upright and tall like a model for a Viking ship prow, manning the tiller, while 20 attractive and nubile young women pull the oars.  Next to and beneath Kate, allegedly Britain’s future queen consort, in the photograph is her crouching mentor, London socialite Emma Sayle, who (along with her “kitten,” all-female team) is doing the dirty work of rowing hard as their “Dragon Boat” skims along the Thames River.  The Sisterhood is in fact Sayles’s charity. Although The Sisterhood reportedly raised $150,000.00 in 2007, thanks largely to the publicity generated by Kate’s participation, they elected to celebrate this by posing in the nude (with strategic body paint) for a calendar that was sold to generate even more funds.

Emma reportedly attended the same all-girls public school, Downe House, at the same time as Kate, who was a pupil there until she left to go to Marlborough College, and that is where they first met.  They reconnected in London sometime later, although the details are now vague.  Kate had begged off The Sisterhood by the time the nude calendar was shot, claiming “security issues,” and thus missed making the group’s English Channel crossing.

“Some people come and get involved, and about 40 per cent don't - they just dance around in their underwear and chat.”

The National Enquirer, the co-oracle that shares supermarket space with The Globe, reported only a few months ago: “Rumors and press reports have circulated for years that Kate cavorted at kinky masked balls for upper-class types staged by private school chum Emma Sayle, organizer of a sex club called ‘Killing Kittens.”

Such frisky antics, while they may have netted the Middletons a royal son-in-law, have surely alarmed the Queen and her household.  And it must make for some interesting conversation as the Royal Family gathers around the Christmas tree for the holidays.

More in this category: « Jindal announces Elio Motors To utilize former GM plant in Shreveport Jindal names LSU Board of Supervisors »
back to top