Jindal, Louisiana GOP Won, But Do They Have Right Stuff? 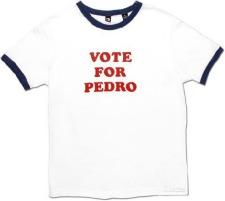 history was made at the louisiana polls this weekend, and the overwhelming winner of saturday’s louisiana elections was none of the above.

in this empty shell of an election with virtually no difference between most candidates and no opposition to bobby, two thirds of louisiana voters chose not to participate. two thirds. this was the lowest voter turnout since 1975. since 1-9-7-5.

this game was over before it started. it just doesn’t matter. not this time. hell, i usually get paid to give a crap and i didn’t give a crap.

the only thing to watch was republicans eating each other because there were no democrats around. hardly anything will really change here as a result of the results. your car won’t run smoother, your coffee won’t taste better, your brights won’t be brighter and your teeth won’t be whiter. your doctor won’t change and neither will your cable bill. and next year any republican will beat obama in louisiana because of the post-katrina demographic diaspora that has led to the non-competitive nature of things today. it’ll take a while for the demos to get their decidedly feeble act together here again.

bobby jindal and his millions in campaign funds won with 65% of the vote against no one you’d remember with no money to speak of. where most see a landslide, i see that 35% of the 35% who bothered to vote actually prefer no one to bobby, and most of the rest were so bummed they didn’t bother.

unlike most people in my line of work, i think not voting is an honest and viable option when one feels that no candidate is worth the effort, or one’s support. i think it makes an important statement as to the sad state of affairs that exists today in politics both here and nationally. it is a vote of no confidence.

one good thing came out of the results. david vitter got slapped statewide. he invested a lot of personal capital and resources into the lieutenant governor and secretary of state races and came up a loser in both. jay dardenne beat diaper dave’s anointed pony billy nungesser for the lt. governor seat, and northshore independent republican tom schedler beat vitter’s choice, jim tucker. vitter was hoping to build up to a run for governor when bobby ascends on high to dc, and those statewide races were to be his next steps up the stairs of the capital. now, both losers are relegated to the sidelines with no bases to build upon. instead, vitter has now shown that he is vulnerable, and he’s made some new and powerful enemies within the gop in the process. so that’s a good thing for all of us.

so the real results of this election are that: 1) the democrats can’t find their butts with both hands; and 2) everyone’s hoping that jindal will get a cabinet seat at the least, or maybe even the veep nod on the national ticket to position himself, and by extension louisiana, for better things in the future.

but for the gop, in the afterglow of their win, there is now a very real and problematic downside.

now, they won’t have anyone else to blame if things don’t improve. they can try to blame others, but if people’s lives don’t improve, they’re now the owners of the next few years and what happens. travelin’ bobby’s been turning down federal money left and right, for schools, for healthcare, for medicaid and more. it’s our tax money, but bobby says no thanks. too many strings says bobby.

so, corporations will get even more tax breaks, and even less money will be available for programs for the poorest and for our children. environmental laws will be flayed to bits and funding for environmental watchdog staff cut to within an inch of nonexistence.

in return, now the gop and business will have to do more than just steal our natural resources and destroy our health and environment. the tradeoff is supposed to be jobs and a higher standard of living, and now they’ll have to deliver. louisiana’s at or near the bottom of every list ever made of anything you’d rather be at the top of. time to start moving up those lists or people will talk…

another fun thing for sane people to look forward to is that evangelical loons will be even bolder and more astoundingly neanderthal than before. it will be a teabag wet dream come true. they will want to make sure that the sanctity of marriage is reserved only to people capable of multiple divorces, serial adulterers, certain cousins, and drunken quickie nuptials at roadside chapels near casinos; god forbid a loving gay or lesbian couple of 20 years in a committed relationship be allowed the same rights and privileges as those bastions of sanctity found at a french quarter quickie chapel. or have access to shared employee benefits. or have the right to care for their loved ones in a hospital.

so the day is theirs, and that’s okay with me, for the time being, because deargodbabyjesus thank you for all the fun i’ll have writing about their misadventures for the foreseeable future.

i also know something else, and that is this: they now have the rope, and eventually they’ll hang themselves. republicans, or anyone with too much control and authority for that matter, are always their own worst enemies. they go too far, and when they get power they get drunk on it. their specialty is telling us that government doesn’t work. now that they’re in, they’ll make sure that it only works for the connected. and they will go too far, because they can’t help themselves, they’re greedy and it’s their nature, and when they do, that’s when the pendulum will swing again.

it already has begun, in many parts of the u.s. and abroad. the disenfranchised and dispossessed are finally getting their act together and it’s scaring the crap out of the teabaggers. change always happens slower in louisiana than elsewhere, as most things do. but the pendulum has begun to swing.  just as nothing could have stopped the victories of the right last saturday, there’s nothing they can do to stop the coming swing except deliver the goods, or be pushed aside in the next few years by the surging tide of what’s left.

DO YOU AGREE WITH THE COLUMNIST ON THS ISSUE? Talk about it below using your Facebook login and typing in the Facebook window below or typing in our Buzzback below

More in this category: « New Orleans Saints, Colts Play Like Best, Worst Teams In NFL The Bobby Jindal Show Was Smashing On Louisiana Election Night »
back to top