New Orleans Events: Boo At The Zoo, Mom's; Dancing With Stars Of The South 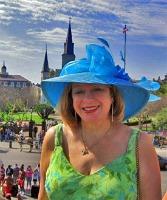 The New Orleans Saints and the entire city are elated about the recent victory of the Saints over the Colts.

It was a perfect way to end to a very exciting week that started for me on Tuesday, when I was cast to be a canine judge along with designer Chet Pourciau the Mid-City Fetch's Canine Costume. Becky Allen and Heidi Junius emceed the Canine Costume Contest and I was impressed by the creativity of the costume. On Wednesday, I attended, what I think is one of the most fun parties in town, the annual fabulous Saks Fifth Avenue's “Key to the Cure” and it was packed. The food, libations, music, entertainment and guests made it a very memorable evening.

I also attended a very enlightining investment-focused business breakfast for forty foreign ambassadors, Gulf South business leaders, and government representatives were present at the breakfast at the World Trade Center.
On Thursday, it was time for me to entertain and, as such, I invited several of my entrepreneurial and artistic friends to co-host a dinner in honor of 10 of 504ward’s talented, brilliant young professionals. It was a very entertaining and enlightening and I must say the food was delicious. You could visit my Facebook and see all th e wonderful photos taken by Frank Stansbury of La Fete News.

On Friday, it was time to don again my pink wig to attend the ultra-elegant “Ochsner Goes Pink” Gala, benefiting Ochsner Health System at Le Forest. The evening included a live auction, a cocktail reception, followed by a delicious dinner prepared by some of the best New Orleans chefs. It was indeed the perfect pink party for a great cause.

The following night, I hated to miss the Ballet, but I could only attend one event and that the lovely Touro Infirmary Foundation's “Here for Life” Gala at the Sheraton Hotel. Michael Berenson received the Judah Touro Society Award and the entertainment was by the one and only Deacon John.

This upcoming week is going be a busy one as well. I am really looking forward to my participation, along with Rufino Saavedra, on Saturday, October 29 at “Dancing with the Stars of the South.” The Louisiana Center for Women and Government presents Dancing with the Stars of the South, featuring Celebrity Guest Mario Lopez and an impressive list of local celebrities as dancers, including me and some very important judges. The event will be at the newly reopened Hyatt Regency. For reservations call 985-448-4770. Not to be missed.

I am also looking forward to participating on Tuesday at my Toasting with Margarita at Le Booze and  being a "Star" at the annual with the Stars”  benefitting  Parkway Partners on Sunday, October 30 and then attending the opening of the Broadway production of Rock of Age on November 1st.

October 30
“Feast with the Stars”
The annual Feast benefiting  Parkway Partners invite you to come party in costume (or not) while sampling the fare of 20 famous New Orleans restaurants. The patron party will honor the Mumfords, and will take place a week prior. Gallier Hall
$75 per tickets with patron packages starting at $250. (504) 620-2224
Sun., Oct. 30

at the Mahalia Jackson Theatre at 8 p.m.http://www.broadwayacrossamerica.com/shows/rockOfAges.html

November 3
9th annual “Cocktails for KID smART”
Event Info: KID smART’s signature fundraising event includes a champagne reception for sponsors and patrons followed by a cocktail party. Joel Event Planning and Catering will provide food and featured artist Charles Bohn will present a hand-thrown ceramic bowl to each sponsor and patron.  4730 St. Charles Ave. $125 per ticket and $750 per ticket at the patron level.(504) 410-1990

November 4
23rd annual
“Justice for All Ball”
This annual fundraiser benefitting the  The Pro Bono Project  brings some of the best food, beverage and music all under one roof for attendees; a raffle and live auction will offer prizes from local and regional businesses and artists.  Audubon Tea Room, $150 per ticket in advance, $175 at the door. (504) 581-3480

November 4
“Signature Chefs Gala”
Benefits: March of Dimes
Dine among the stars as celebrity chefs from New Orleans’ best restaurants treat guests to delicious delights to benefit March of Dimes. While diners enjoy their great night out, celebrity auctioneers will start the bidding to raise funds for the March of Dimes.
New Orleans Marriott- $150 per ticket  (504) 836-2087
November 4
Preservation Hall at Fifty: Celebrating Jazz and Old U.S. Mint Jazz Venue Debut Gala
Benefits: Louisiana Museum Foundation
Lt. Gov. Dardenne will be present to celebrate the 50th anniversary of Preservation Hall benefitting the Louisiana Museum Foundation with a beautiful jazz exhibit and the opening of the new Jazz Venue at the U.S. Old Mint. Honorary chairs include Ben Jaffe, Irvin Mayfield and Jeremy Davenport. Old U.S. Mint
Tickets: $50 per ticket in advance and $60 per ticket at the door for the gala; $250 per ticket for members and $300 per ticket for non-members for the patron party. (504) 558-0493

Polo Lounge of the Windsor Court on Friuday and Saturday from 9 to Midnight.

Every Thursday and Weekend at the Ritz Carlton

Have a great, cool week!