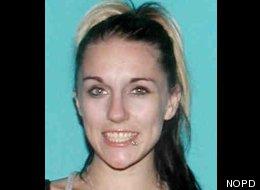 The Jaren Lockhart Murder case, which already has been described as gruesome to the max, has now becoming even more strange and weird based upon facts disclosed Wednesday night in a TV news report by WGNO ABC 26 anchor, Sheldon Fox.

One of the persons who has been arrested for killing and dismembering the young Bourbon Street dancer, Lockhart, Margaret Sanchez was featured as a witness on a crime show, Final Witness.  That program was broadcasted Wednesday night on ABC before the Fox report on the ABC affiliate.

On Final Witness, Sanchez was a witness to a killing six years before.

However, after that program's showing, Fox reported that a Metairie Louisiana couple allowed Sanchez and another suspect to stay at their house overnight, one day before her arrest for the Lockhart killing.  The undisclosed witness said that Sanchez has been her best friend and that night Sanchez and the other suspect slept at their Metairie home.  While at the Metairie home, the suspects reportedly colored their hairs.   They were arrested the next day.

Watch video of news broadcast by Sheldon Fox of ABC26