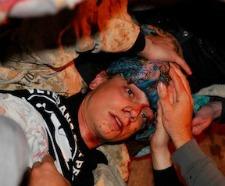 "he was over there protecting the rights and freedoms of america and he comes home, exercises his ‘freedoms' and, it's here, where he's nearly fatally wounded."

the young man being talked about is scott olsen. scott olsen isn’t a dirty hippie or unemployed welfare case or a wild-eyed radical; he isn’t some college student protesting on his daddy’s dollar.

these are the lies perpetrated by the neocons, teabaggers and corporate media about the hundreds of thousand of people in america and around the world involved at some level with the occupy wall street movement. that’s what the teabaggers would like you to believe…what they need to believe for their own sakes. but it’s a lie.

scott olsen is the tragic truth come to stare the liars in the face, and he’s earned the right.

scott olsen is a veteran of the united states marines who served two tours of duty in iraq, during which he earned seven medals. and since Tuesday scott olsen has been in critical condition in a hospital intensive care unit, the victim of an attack by police in oakland california that left him with a fractured skull and swollen brain.

several videos of the attack and its aftermath have been posted all over the internet and seen by hundreds of thousands of viewers. not only does one see the blood streaming from his face as he lay motionless in the street, but when others rushed to olsen’s aid they are themselves hit with flash grenades thrown by police.

scott olsen joined the marines straight out of high school and upon his honorable discharge returned home to small town wisconsin. he moved to northern california last July to take a job as a systems analyst with an internet technology firm.

keith shannon served in the marines in iraq with his friend olsen. back in the states they decided to share an apartment as they both began new jobs in the san francisco/oakland area.

shannon told olsen’s hometown paper the lacrosse tribune, that olsen believed in the message of the occupy wall street movement, working at his job during the day and joining the protesters nearly every evening.

“he’s been dedicated to this even though he has a good job, just trying to support the movement…he felt you shouldn’t wait until something is affecting you to get out and do something about it,” said shannon about his friend.

the quote at the beginning of this column came from a u.s. navy veteran, joshua shepherd, 27, who was standing nearby with other veterans when olsen was attacked. shepherd told the tribune that he considered it a cruel irony that olsen is reduced to fighting for his life in the country he fought to protect.

one other important marine veteran also spoke on the record about the attack: olsen’s uncle, george nygaard, who served in vietnam and still resides in wisconsin. you see, scott olsen is a second generation marine.

nygaard has heard from his fellow veterans who were present at the attack, and had this to say about his nephew and occupy wall street: “two tours over there (iraq) and not a scratch. he comes back here and a …..damn cop hits him with a projectile. he’s a brilliant kid. i’m more proud of what he’s done since he’s been out than when he was in.”

as of 3 am this morning there are reports that scott olsen has been upgraded from critical to stable condition. i hope those reports are true. the oakland police say they are investigating the attack.

scott olsen is just one glaring example of what happens when one gets past the lies of the radical right, not just about the occupy wall street movement, but about who we really are as a nation; scott olsen represents the truth about all we are and can aspire to be, because after the lies, the truth is what’s left.

Why Jindal Would Want Alario To Be Senate President


Jindal, Louisiana GOP Won, But Do They Have Right Stuff?

Notes From The Occupy NOLA March Front, In New Orleans