New Orleans Entertainment: Rock Of Ages For Adults Of All Ages 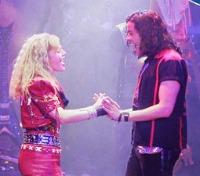 Imagine yourself smack in the middle of the Sunset Strip in the heart of the ‘80s, surrounded by big hair, spandex and rock. The production opens in the Bourbon Room,
a legendary bar owned by Dennis (Matt Ban), an aging hippie in love with rock n roll.
The flamboyant narrator Lonny (Justin Colombo), lays out the plot by introducing the lead couple in a flurry of musical numbers. A small town girl meets a big city rocker
and they fall in love, all set to a soundtrack of the hottest ‘80s music.

Rock of Ages, the second production of the 2011-2012 Broadway Across America series in New Orleans, is a full of quirky humor as Lonny tells the stories of Drew (Dominique Scott),
Sherrie (Shannon Mullen), and the farewell performance of Arsenal, a rock juggernaut led by glitzy Stacee Jaxx (Matt Nolan).This production has everything you remember
from that era, including big hair, loud guitars, and a light show to rival any stadium rock show. The numbers and dancing are second to none, and the intro by
Whitesnake front-man David Coverdale puts you right in the center of 1987 LA.

The main premise of the show was the demolition of the Sunset Strip, which was to be replaced by a clean, efficient strip mall. This premise gets muddled, though, amidst the love stories of Drew and Sherrie, Regina and Franz, and even Lonny and Dennis. In addition to the love stories, you have yet another plot involving Stacee Jaxx and Arsenal. The show does a great job of incorporating the music within the story, but with so many plots going on, the songs sometimes get lost when mingled with other stories and their songs. Ultimately the show was a riot but, due to some graphic material, should be enjoyed by adult audiences.

This five-time Tony-nominated musical has it all; awesome ‘80s music, a live band, outrageous costumes and great timing. Grab your friends, and re-live the rock!
For ticket prices and show times go to www.ticketmaster.com or call the Mahalia Jackson Theater of the Performing Arts at 504-525-1052.

Next up for Broadway Across America is Rodgers and Hammerstein’s South Pacific, opening Tuesday, November 29 and closing Sunday, December 4. Following that will be a “Season Special,” Cirque Dreams Holidaze, which will run from December 20-24. Being a special performance, Holidaze is not included in the Season Ticket package and tickets for the show have to be ordered separately.

Starting off 2012 will be Blue Man Group, running from January 31 through February 5. Following this show will be the season closer, The Lion King, which is offering a month’s worth of performances between March 14 and April 15.

Tickets for all shows are still available. Make your reservations through Ticketmaster or the theater box office at the number listed above.

More in this category: « LSU vs. Alabama Predictions: By Football Media Experts Jindal, Settoon Announces $155M Expansion In Louisiana »
back to top