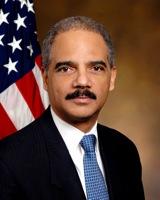 In testimony before the Senate this week, Attorney General Eric Holder admitted that he did not know about the “Operation Fast and Furious” program which involved U.S. agents selling weapons to the Mexican drug cartel. One of those weapons was used to kill Border Patrol Agent Brian Terry. Holder claimed that “there are 115,000 employees in the Department of Justice…I cannot be expected to know the details of every operation on a day-to-day basis."

This embarrassing response proves that Holder is incompetent and possibly lying about his knowledge of the operation. Either way, he cannot be trusted to lead the Justice Department any longer. If President Obama had any decency, he would fire Holder immediately and restore dignity to the Justice Department.

A responsible President would have never appointed Holder in the first place, but, since Holder shares Obama’s liberal views; he is in no danger of being fired.

From the very early stages of the Obama administration, Holder has been embroiled in controversy. Soon after the President’s inauguration, Holder claimed that the United States needed to have an honest conversation about race. He said we were a “nation of cowards,” which was a reprehensible charge about a nation that has made significant strides in race relations in the past few decades. In fact, it was the Attorney General who displayed utter cowardice in the Black Panther case. Back in 2008, club wielding members of the New Black Panther Party intimidated voters at a Philadelphia polling place. Instead of prosecuting Jerry Jackson and other Black Panthers, Holder dropped the case and no one was prosecuted for an outrageous offense that was captured on video.

Jerry Jackson is a known criminal with a long history of offenses. He has been photographed holding a firearm, but, as a felon, he is not allowed to posses a weapon.  Instead of prosecuting Jackson for firearms violations, the Holder Justice Department is allowing him to remain free.

Why doesn’t the Justice Department prosecute Jackson? Maybe his leadership role in the New Black Panther Party is preventing any prosecution. Jackson is also an elected official in Philadelphia, representing the Democratic Party in the city’s 14th ward.

Clearly, Eric Holder is pursuing a liberal agenda which is clearly inappropriate for the Justice Department.  He also needs to be held accountable for the “Operation Fast and Furious” program which resulted in the death of Agent Terry. Once again, Holder’s actions are despicable. In Senate testimony on Tuesday, the Attorney General refused to apologize to the Terry family. The next day, he supposedly sent an apology letter to the family, but it was never received.  It seems that the letter was sent to the website Politico, but not the Terry family.

Holder’s arrogance toward the grieving Terry family is shocking. They deserve not only an apology, but justice. Yesterday, Brian’s parents asked Holder to resign, since they blame the Attorney General for the death of their son.  Brian’s father, Kent Terry, lashed out at Holder. He called the Attorney General and his associates at the Justice Department “liars.” Brian’s mother, Josephine Terry, said that when Holder refused to apologize, "I sat in a chair and cried…It was so inhumane. An apology to anybody means at least they are trying to fix it. He didn't."

The scandals of the Holder Justice Department are outrageous. Of course, the most egregious is the “Operation Fast and Furious” program which resulted in Brian Terry’s death. There are many troubling questions about this operation. Why was this program authorized? Why would our government knowingly sell weapons to the Mexican drug cartel?

On a human level, it is a tragedy made worse by the callous attitude of Attorney General Eric Holder. He is a very poor representative for the Justice Department and the United States of America. He is incompetent and has no common decency. If he is not fired immediately, Congress should take action and impeach him, so that true justice can return to the Justice Department.

Save up to 80% on Office Equipment for your Business