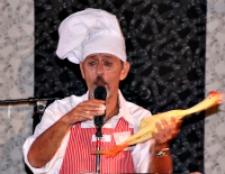 as you can see by the photograph that comes with this column i am already hard at work cooking up something special for the thanksgiving holiday. granted, the bird looks somewhat anemic, but when i’m finished with it, it’ll be gorgeous.

on thanksgiving day my loved ones and i will join millions of other american families, all sitting down to give thanks and feast together at the same moment: halftime.

but before the festivities ensue, i wanted to knock out one more column before taking the rest of the week for family. in so doing i took a moment to reflect on non-family things for which i’d like to express some degree of gratitude. the result:

ten things i am thankful for.

enjoy your holidays with your loved ones, and afterwards we can have lunch and share what’s left-over.