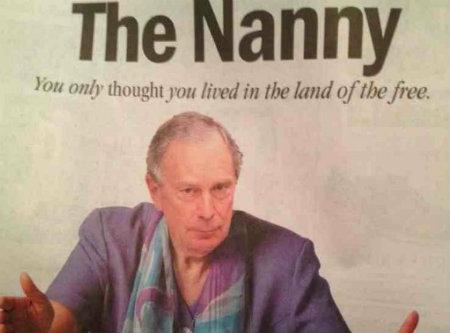 The nagging nanny of New York, Mayor Michael Bloomberg, is at it again, engaging in his favorite activity, telling his citizens what they can consume.

This time, the Mayor is targeting prescription painkillers in the city’s emergency rooms. By mayoral edict, he will reduce the supply of certain pain medication in the emergency rooms owned by the city.

He claims the move is a way to reduce dependence on these drugs and to make sure unused pills do not fall into the wrong hands. According to Bloomberg, “if you get 20 days worth of pills and you only need them 3 days, there’s 17 days sitting there. Invariably some of the kids are going to find them, or you’re going to take them and get you addicted.”

Bloomberg believes his move will reduce crime because fewer people will become hooked on drugs, which leads to “a lot more hold-ups of pharmacies, people getting held up as they walk out of pharmacies….What are they all about? They’re not trying to steal your shaving cream or toothpaste at the point of a gun. They want these drugs.”

Critics are lambasting the move, noting it will hurt the poor who frequent the city’s emergency rooms for primary medical care. In response, Bloomberg claims that while people may “have to suffer a little bit,” it is necessary to combat the problem, “so…we’re going to do it and we’re urging all of the other hospitals to do it.”

It is utterly amazing that Bloomberg is so bored with the responsibilities of his primary job, being Mayor that he has to invent new duties for his office, primarily limiting the rights of his citizens.

The Mayor has an obsession with dictating to his constituents and reducing their consumer options. In other words, he is infringing on their constitutional liberties and should be sued by outraged New Yorkers. From his ban on Big Gulp soft drinks to his attack on vending machines to his limits on baby formula in New York hospitals, Bloomberg is engaged in an ongoing attack on the U.S. Constitution.

His foremost interest is to intervene in health, diet and medical decisions which should be none of his concern.

His citizens are not helped by this latest attack on their rights. A patient and his doctor are the best ones to decide whether pain medication is appropriate. If there are unused prescription pain pills, it is the responsibility of parents to make sure children do not have access to them.

Even after this decision, there will still be break-ins at pharmacies. This will not reduce criminal behavior; in fact, it may produce more crime and accidents as suffering New Yorkers will be denied adequate pain medication and may not only suffer, but also lose their sensibilities.

Bloomberg is not a doctor or nutritionist, so he has no experience or expertise on these issues. In contrast, he is a big liberal who is hell bent on dictating to his citizens what they can and cannot do.

He is the epitome of the idealistic politician who pursues “feel good” legislation that supposedly addresses a problem, but, in the end, accomplishes nothing.