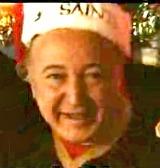 I must have listened to Vince Vance’s “All I want for Christmas is You” dozens of times.

So, when I first heard the audio of his new rendition--Cajun Christmas or  “All I want for Christmas is you, Cajun version” ("Tout Ce Que Je Veux Pour Noel C'est Toi."),  I thought, good, but “I look forward to seeing the music video”.

It was not until Vance sent it to me when my jaw dropped, once again.

Actually, it almost hit the floor last year on the eve of Katrina’s 5th Anniversary.  Since that time, I have viewed his “I am New Orleans” music video which I admittedly have watched time and time again, as I know so have many.

His new Cajun song was adapted from the same melody with many of the same lyrics as those both he and musician Troy Powers wrote in the late eighty’s.   He added a Louisiana, “naturally Cajun” theme and images.  Then came a dose of French, and a dash of Tony Chachere seasoning.  Topping it off was the unique boyish Vince Vance stylistic zany humor.   What has emerged is an elegant Christmas Gift, tightly wrapped for Louisiana and its loved ones, to cherish, forever.

Through his music, Vince Vance transparently displays how much he feels for Louisiana, the Gulf Coast and New Orleans.   It is likewise obvious how much I enjoy his work.

I am honored to post his music video on our Bayoubuzz Youtube channel, hopefully for the world too share.  His Cajun music video should give him joy since all he wants for Christmas is “You”

In turn, all I want is for everyone can experience the beautiful heritage and spirit so graphically expressed by his work.

How did for a Cajun Christmas song idea come about?

My mother passed on in 2010 and since her passing I have moved out of the city to a retreat in Bayou Gauche'.  Living near the swamp and making friends with the fine people of the West Bank, like Merv Autin, Bobby Guidry and many more, who have opened their homes and hearts to me, has put me in touch with the strong French Roots of our Culture and the profound influence of the French on Louisiana.  Our state, along with the geographic heart of our country was sold by French Monarch Napoleon in 1803 to the United States.   Though 200 years ago, more than an accent remains.  Many signs still read in both in English and French because of the French Heritage.  The first sign which welcomes you on any major thoroughfare into Louisiana is Bienvenue en Louisiane.  We are just different down here.  We eat square donuts called beignets (pronounced Ben-Yeas).  In the middle of winter, we celebrate the Fatted Cow or the Beouf Gras at Mardi Gras with parades.  And, our Catholic/French European/Cajun Roots distance from our fellow Americans who developed more from harsh Protestant roots of the Pilgrims.

We are not descendants from such a severe culture.  Cajuns are a happy, carefree people who find any reason we can to laugh, to celebrate life with our indulgent zydeco and swamp pop music, to enjoy the ethnic flavors of our food and drink.  Where else, but LaPlace, can you go to find an Andouille (pronounced Ahn- Doo-Wee) Festival.  This is so true down in the Bayou, throughout the River Parishes, the Delta, Acadiana and certainly Nouvelle Orleans.  When you get down to it, through all the partying and revelry are a people who care about their Country, their Culture, their God, their Family and Friends.  And at the very heart of "All I Want for Christmas is You" is that basic yearning for what is real in life... important... at Christmas and all year long.

Why did you do a Cajun version of All I want for Christmas is you?

I wanted to create a heartfelt and, at times, humorous musical Christmas Card that I could share with my family, friends and fans- -one that they in-turn could share with their family and friends who may be very far away during the holidays.  I knew that all of the Louisiana, especially those living in the Swamp and along the Bayous, the River Parishes, the Gulf Coast and even the Mississippi Coast and South East Texas would love to be reminded of the beautiful words  of our Number One Hit, but sung in French.  On a broader level, because we are a rather singular culture, I thought that the world might want to understand us better, too. The world is so hungry for any message from "Swamp People" and we "River Rats."   I wanted to show how we celebrate Christmas... perhaps a bit differently than they would.  More than that, I wanted the world to share the true meaning Peace on Earth and that yearning in the hearts of the simple people of the Deep South.

Also, I wanted to sing my song for my mother who so loved it. In the bridge I sneak in a message en Francais to her.  See if you can find it.

How was it done?

The song is quite simply a Cajun Waltz produced by Edward Loftus with instruments which we traditionally express with here Louisiana: Zydeco Accordion, acoustic guitar, bass and drums.  The song opens with a traditional Cajun Chord structure.  Much care and many hours of practice and then recording and re-recording and re-learning and speaking with my French Cajun friends went into it.

And the spoken part was as honest and truthful that I could make it.  I speak of the music in the church at mass being so beautiful.  Well, that is Doc (AKA Ed Loftus) playing the cathedral Organ there.  And, honestly, I really was crying in the church as we shot that part.

Is there a particular meaning behind the new music video?  How might that meaning differ from the initial version?

I am a traditionalist.  My life has been my band The Valiants.  Valiant means Courageous, and I am dedicated with a fire and fervor, perhaps Valiantly, to hold on to the good of the past, especially the feelings and music of a bygone time.  This song and video brings you the reality of those olden days.  But make no mistake, this music, these feelings are alive, right now, here in the South.  There is a resurgence of love of family, country and religion here in the United States... and of the Beauty of Christmas.  Perhaps one of the lasting effects of recent attacks on our nation is to further entrench the real meaning of Christmas, of Peace on Earth, of Good Will to Men.... to say with fervor and dedication: "Joyeux Noel" or in English, "Merry Christmas."

What has been the impact of your music video,  “I am New Orleans”, since its release last year?

The impact of "I Am New Orleans" in my life has been profound, even more than financial.  Many people from New Orleans, those who just love New Orleans, those who have been transplanted to other strange places worlds away from New Orleans have found a meaning far deeper than anything that I had originally intended.   I have come to realize my audience doesn't care about the pain when it comes to truthfulness.  No one, unless you could have lived through what we have, of the loss of everything, of trying to hold on to your very thoughts blown away by violent winds or memories that have been washed away by a flood, could possibly know.  We sometimes hold on to a piece of scrap paper. To others it is trash, to us, a reminiscence of who we are.

Often, I am asked to just speak the words to "I Am New Orleans."   I see tears fill the eyes of my audience.  They stand and applaud.  I am so humbled, but I realize they are happy to know that someone understands what this shared experience is -what this Rose of Wisdom handed to us by God is.

Is there anything else you might want for Christmas?

I once knew love and was parted with a girl that I loved very deeply.  I hope one day God sends me that love again.