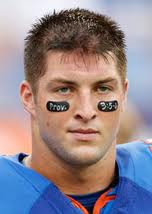 One of the major surprises of this NFL season has been the play of the Denver Broncos. The team is atop their division and on a roll, winning six of their last seven games.

A major reason for their success is a young man who is the subject of way too much criticism, quarterback Tim Tebow.  Usually, when a team wins, the quarterback receives universal praise, but not Tim Tebow.

The liberal sports media hates Tebow because he is an unabashed Christian. Tebow has the audacity to regularly give thanks to God and not act like a fool on the sidelines. His prayers infuriate commentators who don’t like seeing such an outgoing Christian.

Many of these commentators are former NFL quarterbacks who serve as “analysts” on television. For months, they have been claiming that Tebow “lacks the skills to succeed in the NFL.” They have been repeating the same myths we have been hearing about Tebow for years. He supposedly is too much of a running quarterback, can’t throw accurately, has an unusual style, etc.

All of this nonsense is really comical for Tebow has enjoyed tremendous success. In 2007, he won the Heisman Trophy and eventually led the Florida Gators to two national championships. By the end of his amazing college career, he established a slew of team, conference and NCAA records.

As a NFL player, Tebow has not allowed the constant criticism to impact his positive attitude. In fact, he has been respectful and let his play on the field do his talking. He has led his team to five straight victories and given the Broncos a chance for the playoffs.

What is truly refreshing about Tim Tebow is that he is a great role model for youngsters. He accepts that role and cherishes it. Instead of committing crimes or fathering children out of wedlock, Tim Tebow understands the responsibility that professional athletes have in our society.

The credit for his humility and faith lies with his family who operate a Christian ministry. In 2010, he appeared with his mother in a pro-life television commercial. Back in 1987, Tebow’s mother became sick on a trip to the Philippines. She ignored a doctor’s recommendation to abort her fifth child, Tim.

Thank goodness Mrs. Tebow chose life for the world has been truly blessed to have Tim Tebow fulfill such a prominent position today. Although he has many skills on the football field, his most significant attributes are his strong Christian faith and his positive attitude.

In this day and age, with all of our societal woes, it is nice to have at least one successful professional athlete who our children can both admire and aspire to emulate.