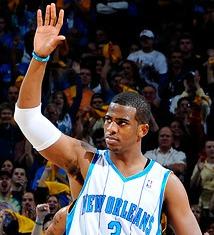 Chris Paul is not taking the league's ruling blocking a three-team deal lying down and believes he will still wind up with the Lakers, where he could team with Kobe  Bryant to form the best back-court combo  in the history of the NBA.

Exactly what are his options and what will be the end-story is uncertain.

The Hornets agreed to trade Chris Paul to the Lakers for forwards Paul Gasol and Lamar Odum, but the NBA ruled "no deal" because it didn't think the Hornets were getting "enough" in the deal.

Paul, 26, might be the league's best passing-scoring combo for a guard in the league  and can even rebound well for a 6-footer. He could become a free agent next July, so the Hornets wanted to trade him before this season to avoid distractions that befell the Nuggets last season with Carmelo Anthony.

His contract calls for $16.4 million this season and a player option for $17.8 million next season.

Paul contacted Billy Hunter of the of the players' union to see legal options he had.

Reports are the small-market owners blocked the trade.

The Hornets began practicing at the Alario  Center in Westwego on Friday and Paul was a no show.

So, through all of this, what has Chris Paul said on Twitter?

To show the debate through the cyberworld of Twitter, here are some of te latest comments about the Chris Paul controversy:

Big S/O to @DezWells_5 out there HOOPIN for Xavier!!! #TeamCP3Alum

One source close to the three-team Chris Paul trade talks just toldESPN.com: "The deal is off."

Simmons in the HERD: Chris Paul will sue the league over this. They picked the wrong guy to mess with. He's a smart guy thats involved.

Chris Paul's jersey says it all: "NO LA" twitpic.com/7qv6uo

Lakers can't appeal to NBA office about Chris Paul trade block b/c the league considers the deal to have been nixed by N.O., not the NBA.

The Lakers, Hornets and Rockets are expected to appeal the NBA's decision to block their agreed upon three-way trade involving ChrisPaul.

Could the Chris Paul ruling be the final straw that sends David Stern into retirement? Some are hoping so. bit.ly/tFMOA2

Billy Hunter tells Bloomberg that he anticipates Chris Paul will be in training camp. As for lawsuit: ``Not at this moment.'' #NBA

Stern: ``I don't want to speak on the basketball side, but that particular one was weighed against Chris Paul's continued presence in NO.''

More in this category: « No-Budget Congress, Obama Creates Fiscal Lord Of The Flies Rick Perry, Christianity, Gays And Strong Wrong »
back to top