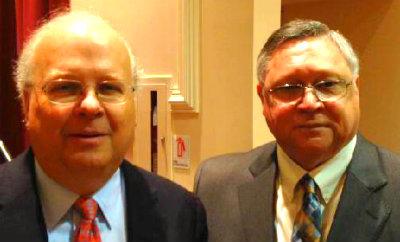 It was the Louisiana Governor Bobby Jindal's tax reform and the Karl Rove show in this year's rendition of the Louisiana Association Business and Industry annual meeting and luncheon, held Tuesday, in Baton Rouge.

Jindal's Secretary of Revenue, Tim Barfield spoke before a packed-house addressing the governor's yet-to-be-released tax reform proposal which some believe would revolutionize Louisiana's way of doing governmental business and budgets.   Although no specifics have been disclosed, Jindal would like to generate revenues by eliminating the personal and corporate income taxes and increasing the sales taxes. (BELOW: Watch 3 minute segment of Barfield's speech)

During the luncheon, Karl Rove blasted the Obama Administration for the nation's ongoing budgetary and deficit issues.

(Listen to an audio segment of Rove's speech to LABI)

More in this category: « New Orleans's tradition, Galatoire's reopens in Baton Rouge with a soiree Louisiana Sen. Landrieu in gun control crossfire, Dr Fleming is not »
back to top