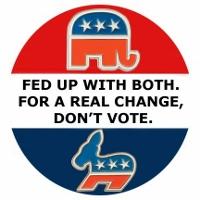 hidden in the din of tea-party-flavor-of-the-week rick santorum’s meaningless so-called victories in this week’s gop political caucuses was the real winner: the voters who stayed away in record numbers and refused to vote for any of these clowns.

voters are staying home in droves and rejecting gop candidates in stunning numbers.

little has been written or said about this by the corporate media, but the fact is that record low voter participation is now beginning to shake the foundations of the corrupt and broken charade of a political process being pawned off these days as democracy. people are rejecting a process that is really just a beauty pageant for ugly people sponsored by global corporations, with the field of so-called options limited and controlled by billionaires and the media that they own in league with the candidates they own.

people say numbers can be manipulated, but sometimes the numbers don’t lie. the hard and frightening news for both political parties and their corporate masters are reflected in historically low turnout since this primary season began. no matter how you look at the figures, this is great news for the ‘don’t vote’ movement. examples:

in nevada this week, only 33,000 of a possible 465,000 registered republicans bothered to turn out. don’t like those numbers? compare nevada to nevada four years ago then…turnout this year was down 25%!

in the florida primary last week, where gop candidates and their vile super pac sponsors spent over $18 million dollars…in one state….turnout was down by a whopping 400,000 voters! ouch!

in missouri three days ago, turnout was down a mind-boggling 57%!

in minnesota voter participation was down by 24%. in colorado, turnout was down 7%. and all this failure is going down at a time when the corporate super pacs are spending record amounts of money to inspire turnout for their chosen meatpuppets.

people are no longer willing to vote just for the sake of voting. the simplest explanation is usually the right one: people aren’t voting because they realize that there’s no one worth voting for, or even against, because the field is bought and the game is rigged. they are refusing to endorse a corrupted process with inferior options. they’re refusing to vote for epic dumbness spouting rabid evangelical loon drivel, and whose teabagger sympathy is clearly reserved only for the wealthiest among us.

that reminds me: remember how the whole tea party thing was supposed to revolutionize and electrify the nation and spur massive voter turnout? instead, they have achieved the exact opposite. the actual voters are rejecting their freakshow and refusing to play. and now the actual voters are rejecting all these candidates who’ve signed every goofy anti-everything-sane pledge the teabaggers have foisted on them. all they’ve really accomplished is raising the level of nausea in the rest of we the people and ensuring the demise of every horse they’ve backed.

vote for any of them? are you kidding?

this sentiment and philosophy of active non-participation has clearly taken root and the political philosophy behind it are outlined in the movement known as the national day of inaction, don’t vote on november 6th : http://www.facebook.com/#!/pages/National-Day-of-Inaction-Dont-Vote-on-November-6th/198221836942532

the level of discontent with available options among the american people is obvious, and movements to encourage non-participation are clearly gathering momentum as the primaries listlessly drag on.

so, what’s left for us to do? when there’s no one worth voting for, don’t vote. do it in historic numbers. refuse to play a rigged game where no matter who wins, you lose. only suckers play a game like that. if enough americans send that message this election year, maybe next time around we’ll have someone worth voting for.

and visit the national day of inaction page on facebook to learn more.

More in this category: « Passing On Peyton, Eli Manning Debate Jindal, Louisiana Patronage And Incestuous Insects »
back to top