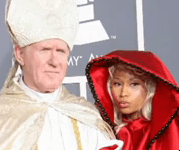 On the Grammy Awards Sunday night, viewers were treated to heartfelt tributes to Whitney Houston and stunning performances from truly talented entertainers like Adele.  Unfortunately, viewers were also subjected to the latest round of Catholic bashing from Nicki Minaj, a very troubled rap star.

Minaj arrived at the show dressed in a devil costume, accompanied by an actor impersonating the Pope.

On stage, Minaj was levitated, exorcised and spoke in tongues. Surrounded by fire and sexual imagery, and accompanied by a choir, Minaj succeeded in tainting a very uplifting and emotional evening at the Grammy Awards

Supposedly, Minaj was singing “Roman Holiday,” a song on her new album. However, viewers were so distracted by the nonsense on the stage that it was impossible to listen to her song. The overall result was that most viewers were unimpressed with the song and angry with her performance.

It was a rather disgusting spectacle that was not appropriate for any awards ceremony. Sadly, viewers across the nation, including young children, were subjected to this hateful display. By mocking the Pope, exorcism, and the Catholic faith, Minaj offended millions of religious Americans. It is obvious she could not care less for she responded on Twitter that people should “stay offended, not a single f**k given.”

Nicki Minaj is the only the latest in a long line of rap stars who specialize in offending Americans. Just last week at the Super Bowl, British rapper M.I.A. flipped the bird to Super Bowl viewers.

On the Grammy Awards Sunday night, Minaj in effect flipped the bird to millions of American Catholics. While attempting to shock viewers and generate more publicity, Minaj only succeeded in angering people and turning away fans. Her insulting performance will undoubtedly hurt her album sales and potentially her career. Since her album is filled with such filthy songs as “Stupid Hoe,” bypassing this drivel makes a great deal of sense.

It is a shame that the Recording Academy and CBS allowed such a performance during the Grammy Awards. A song ridiculing tenets of Islam would not have been allowed on the show, so neither should one mocking the Catholic faith. It is clear there is a double standard in the entertainment industry.  According to Dan Gainor of the Media Research Center, "bashing Catholics is 'in,' and Nicki Minaj and the Grammy’s pulled out all the stops – making fun of the Sacrament of confession, mocking exorcism and using the Catholic Church as background for a bizarre musical number."

Bizarre is a nice way of saying it was awful. In contrast to Nicki Minaj, it is nice to hear a real artist like Adele who can actually sing and does not need profanity or shock value to draw attention. It is her talents that make people want to buy her albums and listen to her music.

Since Nicki Minaj has limited talent, she uses shock value to draw attention. However, mocking Catholicism and the Pope is no way to build a career. The more people learn about her, the more disgusted they will become.

In the meantime, she might want some real help to remove those demons possessing her.  The President of the Catholic League of America, Bill Donahue has a great idea for Nicki Minaj, noting that "there are Catholic priests who are trained to perform exorcisms, and it seems plain that the time has come for Nicki Minaj to make an appointment.”

Does your business have a customized phone app?  Why not?

More in this category: « Jindal Announces Union Pacific Corp Expansion of Louisiana Operation Pinsonat: Behind The Louisiana Elections Background Noise »
back to top