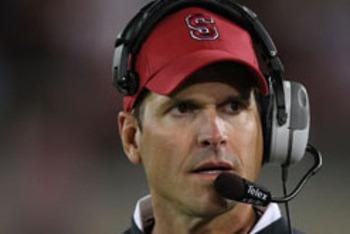 Saints fans are breathing a little easier today after the hated Falcons blew a 17-point lead Sunday and allowed the 49ers into their sixth Super Bowl.

The Niners came back much the same way they did last year against the Saints in the semi-finals, by dusting off TE Vernon Davis and making him a hero. After almost single-handedly demolishing the Saints last year, Davis caught five passes for 106 yards and a touchdown. This is the same guy who had caught exactly seven balls in his previous seven games. If Dick Vitale covered the NFL, Davis would be one of his "PTP" prime-time-players.

Davis' catches always seemed to come at critical times when the Niners needed a boost. Much of that came from the guy on the other end of the throw. QB Colin Kaepernick's blossoming began in part when he led his team over the Saints in Week 12. He has rekindled memories of Joe Montana's miracles and Steve Young's fast feet during his seven-game career as an NFL starter. He was on the cover of Sports Illustrated and survived with the win over Atlanta, and now everybody wants a piece of him.

That includes Ray Lewis and the Ravens' defense, which will get the opportunity in Super Bowl XLVII in the Superdome. The Ravens are clearly reprising the role that Eli Manning and the upstart Giants played to perfection last season. The Giants made the playoffs in the final week of the season and rode the wild card road show all the way to a Super Bowl victory. This year, the Ravens have been underdogs most of the way, but have responded splendidly including Sunday's victory over the heavily favored Patriots.

Kaepernick's Super Bowl counterpart will be the greatly underrated Joe Flacco, who seems to do nothing well but win games. But drilling down into Flacco's career shows much more than that. His record of 62-30 is five wins better than Aaron Rodgers, and he is the NFL's winningest QB since he was drafted out of Delaware in 2008.  He has started all 92 games since then and is the only passer in NFL history to win post-season games in each of his first five seasons. Through his first 18 games this year, Flacco has more completions that travel at least 20 yards (44), the most yards on 20-yard-plus throws (1,441) and the most touchdowns on deep strikes (15). Flacco is no flake-o!

Other than the quarterbacks, other great story lines abound for the Super Bowl. It will be the first time two coaching brothers ever squared off in a Super Bowl as Baltimore's  John Harbaugh will face brother Jim of the 49ers. Ravens LB Ray Lewis has announced his retirement and hopes to go out with a second ring to match the one he won in the Ravens' only other appearance, a 34-7 whitewashing of the Giants on January 28, 2001. Ravens WR Jacoby Jones is a New Orleans native and his mother, Emily London Jones, is a former administrator at the University of New Orleans. Former Saints assistant Vic Fangio is defensive coordinator for the Niners and orchestrates the team's underrated pass rush.

The Niners have never lost a Super Bowl, having won all five in which they have participated, including the game's biggest walkover, a 55-10 pummeling of the Denver Broncos, the last time they played one in the Superdome, January 28, 1990. What do I think about the outcome of this one? I think the Ravens will cover the early 4-point spread and probably find a way to win it all.

More in this category: « Text of Obama Inaugural Address: All of us are created equal Goodell takes Bounty off Saints' Payton, so what to do about Spagnuolo? »
back to top